A review of The Dark Knight including description of the movie, areas of concern, teachable themes, discussion questions, and scriptures to use. 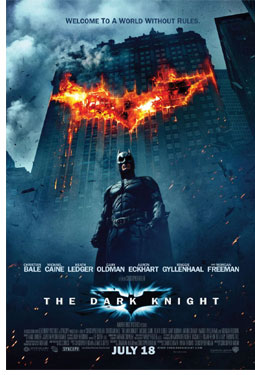 The bottom line (at the top) is this is an excellent movie that your kids should NOT see. However, if they do see it, don’t miss the opportunity to talk about some of the issues this movie raises. On the surface, this is a basic, crazed-maniac- wants-to-kill-and-destroy-and-hero-has- to-stop-them kind of plot. However, there are some deeper themes that are addressed in this movie that make it stand out as a great movie.

The biggest concern for this movie is violence. Although that is probably shared by all superhero movies, not all superhero movies feature the villain talking about the pleasure he gets out of killing with knives instead of guns. Heath Ledger plays an exceptionally twisted Joker who likes to tell some pretty horrific stories about how he got the scars on his face. There is a psychological aspect to the violence in this movie which elevates it beyond a basic superhero violence level.

Another concern that some may have in this movie is use of alcohol. In two separate scenes, characters from the movie suggest to someone that alcohol is a viable way to deal with their problems. Nothing is done to suggest that they may not be right. The only other concerns were fairly minor (considering the movie is PG-13) such as a few scantily-clad women and mild profanity (limited to the use of the word “hell”).

Other topics that are addressed in this movie include, personal sacrifice, grief and revenge. There really is a depth of social commentary presented in this movie that could be explored for a long time.