A review of City of Ember, including description of the movie, areas of concern, teachable themes, discussion questions, and scriptures to use. 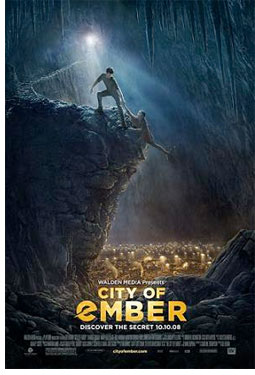 My family read (and enjoyed) the book, City of Ember, by Jeanne DuPrau so we naturally wanted to see the movie when it came out. As with every book to movie adaptation there are a great deal of variances in the plot, but City of Ember does a fairly good job of keeping true to the feel and overall message of the book.

The cast is lead by several familiar actors including Bill Murray, Tim Robbins and Martin Landau. The child actors playing the lead, Doon and Lina, were great. The story is set far in the future when a group of scientists, architects and engineers build an underground city called Ember to hide a group of elderly people and small children from an impending world disaster. They do not want the young citizens to know of the outside world so they hide the escape from Ember in a box set to open in 200 years. Each mayor of Ember is to pass down this box to the next mayor until it opens. However, the box gets lost and opens when no one is around to notice it.

Finally, Lina finds the box and with the help of her friend, Doon, they set out to find the way out of Ember, which is beginning to fall apart.

City of Ember is a pretty clean movie with no swearing and no sexual references. There is a side character who is portrayed as a kind but naïve woman who thinks the “builders” who gave them Ember will one day return to rescue them. Whether this is a parting shot at Christianity on the part of the author or not is difficult to judge, most kids under the age of 13 would never connect these concepts together though. It could offer a chance for discussion on what the second coming means to Christians.

There are some large underground creatures, security guards chasing kids and other intense moments, which younger children may find difficult to handle.


John 14:2-3 - There is more to this life than what we see: At the end of the movie the kids look down through a cave opening and see the city of Ember all lit up, far down below. It reminded me of how earth may seem to those in heaven. All the worries, fears and nightmares of Ember were left behind in the beauty of this new place, the outdoor surface. One day, this will happen for everyone who holds faith in Christ, as we leave all the worries, fears, and pain of this world behind.


Matthew 25:14-27 Lina, Doon and Doon’s father all have to use their God-given resourceful natures to help them find the way out of Ember.


Psalms 119:36-37; Proverbs 18:1 - the Mayor of Ember serves as the ultimate caricature of selfishness, storing huge amounts of food for himself while the citizens of Ember go without. Even one of Lina’s friends from school gets caught up in selfishness. In the end, it leads to the Mayors’ demise.