Movie Review: The Tale of Despereaux

A review of The Tale of Despereaux, including description of the movie, areas of concern, teachable themes, discussion questions, and scriptures to use. 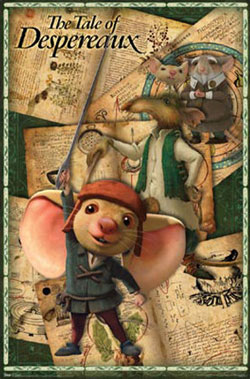 The Kingdom of Dor is experiencing some major problems. On “Soup Day,” a rat, Roscuro, hoping to get a taste of soup, frightens the Queen who in turns passes out in the soup and dies. The King, in mourning, banishes all rats from the kingdom, upsetting the natural order of things.

There are three worlds in this movie: the Human World, the Mouse World and the Rat World. Believe me, you don’t want to go to Rat World. It is dark and sinister. It is where mice are sent when they are banished. The rats are all pretty awful. Roscuro gets exiled there. Mouse World, however, is a pretty decent place. Despereaux Tilling lives there with his family.

Despereaux Tilling is indeed an amazing mouse, but he would never tell you that. When asked, he simply states that he is a gentleman who lives by a code of honor…chivalry, bravery, courage and truth. That is not the only thing unusual about this “gentleman.” Despereaux is small even for a mouse, yet he sees himself as a giant. He has enormous ears. He wouldn’t scurry. He doesn’t cower. He reads books; he doesn’t eat them. He drew a picture of a cat and named him “Fluffy.” Those in the mouse community out and out tell him that he can’t be a mouse if he can’t learn to be afraid ... something Despereaux never learns. A recurring theme in this movie is what you look like doesn’t equal what you are.

We are told in the movie that “if you know anything about heroes you know that a hero doesn’t appear until the world really needs one.” The world really needs Despereaux. In the end, he rescues the Princess, helps the King, frees Roscuro and brings sunshine back to Dor…among other things.

This would be a wonderful movie just on the merits of that story, but deeper, this is a story that teaches about forgiveness. In fact, it characterizes asking for forgiveness as a noble quest. We are told, “Forgiveness is the strongest thing a person can feel. A single act of forgiveness can change everything.”

Despereaux does not follow rules. It is stated in the movie that these rules were not meant to restrict the mice, but to protect them. This would be a good point of discussion.


Despereaux has no fear. Those in the mice community are very concerned with this. He is even paired up with his brother to learn how to fear, but fear does not come natural to Despereaux.


Even though it was an accident, Roscuro understands that he must ask for forgiveness.


Through the experiences of Despereaux, who is too small and has big ears, and Mig, who longs to be a princess, we learn that looks really don’t matter...it is what is in your heart.


In this movie we are told that, “The same thing that makes one person angry, can turn another person to grief.”

Deuteronomy 31:6
“So be strong and courageous! Do not be afraid and do not panic before them. For the Lord your God will personally go ahead of you. He will neither fail you nor abandon you.” (NLT)

Conclusion
This movie really is a gem. It is straightforward and honest. It doesn’t mind telling us truths head on. Not only did I enjoy it, but I was touched by it. It is worth the watch. I can’t wait to see it again.