A review of Cars 2, including description of the movie, areas of concern, teachable themes, discussion questions, and scriptures to use. 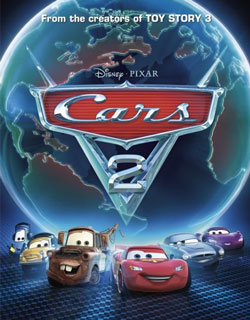 Fast cars, international spy intrigue, explosions, high tech gadgets, suspense, and buck-toothed tow truck Mater in the thick of it, stealing the show from Lightning McQueen as the leading man of the film. What more could you want in a movie?

Cars 2 has all of that and more, but at its heart, it is about friendship. Mater is Lightning McQueen’s most enthusiastic supporter. He is also a constant source of embarrassment due to his innocent unabashed kindness toward everyone. At one point, Lightning McQueen loses a race because of Mater’s clumsy use of a microphone which misdirects Lightning into a lane change that allows his adversary to pull ahead to victory. He then has some harsh words for Mater, clearly indicating he does not need or want the tow truck’s help at all.

Mater is crushed. The sharp words by Lightning and the cruel laughter of other cars haunt Mater’s memory during moments of vulnerability and isolation. Elsewhere, Lightning begins to feel the burden of his guilt for the harsh words he spoke.

And then things get dicey for both of them as they unwittingly get pulled into a plot which transcends the race, and threatens both of their lives, as well as the lives of many others.

Question is, will they live long enough to repair their friendship? Watch the movie to find out.

The film is rated G. Some children may become bored with extended dialogue which develops the spy craft plot points during parts of the film. Clocking in at just less than two hours, it is a bit long for its intended audience.

There is a mild potty humor scene in which the arch-villain car sets up Mater, making it look like he leaked oil (e.g. relieved himself) in front of a large audience. Mater rushes to the restroom. Because they were at a racetrack in Asia, he misreads the signs and accidently enters the women’s facility, prompting screams from the female cars within, and snickers from the audience. When Mater finally makes it to the men’s restroom, further mild shenanigans ensue. While the events produce chuckles, they also may generate interesting questions from kids to their parents at home.

Lightning McQueen realizes his reaction to Mater was harsh and hurtful. He goes to great lengths to restore their friendship and set to rights the wrong actions he had taken against him. For his part, Mater also desires for their friendship to be reconciled, recognizing that his clumsiness had hurt his friend and apologizing for it.

This is demonstrated by their mutual faithfulness and high regard they learn to hold for one another.

Mater gradually learns this during the film. His friends, who sometimes do not take Mater seriously, also begin to recognize this.

Cars 2 is a solid sequel to its predecessor. Although it runs a little long, there is enough action and humor to keep most kids interested. I appreciate its focus on friendship and how to handle conflict. The film makers have given parents a terrific opportunity to discuss these issues with their children. I watched the film in 2D and I do not feel like I missed out. I recommend it to most families, except for those whose children might start fussing because they are lost in some of the prolonged dialogue and the length (1:53) of the film itself. Most kids 5 or older should be fine.