A review of Avatar, including description of the movie, areas of concern, teachable themes, discussion questions, and scriptures to use. 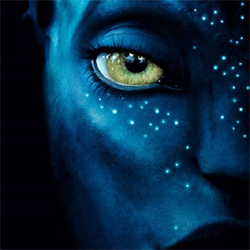 First of all this movie was visually stunning. The cinematic eye candy is just amazing and all the stories that are wrapped up into this one film seem to all intertwine into one cohesive story line. Even though this movie is 2 hours and 30 minutes long, the spectacular world portrayed is of such imagination it doesn’t really seem like it is that long. Our main character “Jake Sully” is a very reluctant hero who must show a lot of determination in order to save the native population called the “Na’vi” that he falls in love with on the alien planet of Pandora.

At the beginning of the movie there is a lot of cursing but this seems to fade away quite a bit once the plot is all set-up and the story is in full swing, but it never totally goes away. There is a pretty intense scene of sensuality between the two main characters (Netyri and Jake Sully) in our story. Plus all the Na’vi woman and men are pretty scantly clad. There are a lot of pretty intense emotional scenes and some pretty extreme sequences of violence. There are a lot of religious undertones of the Na’vi of Pandora worshiping nature. Their god is a tree called Ewpha.


Our main character Jake Sully was confined to a wheelchair. When he first arrived at Pandora no one thought he would make it or that he should even be there. He was determined to see his mission through even though he was the only one on his base that couldn’t walk.


As Jake begins his mission and starts to get used to his avatar Na’vi body he begins to realize that he must do the right thing even though a lot of his friends are not willing to do the same. It’s always harder to stand up for what is right especially when the closet ones around you are not.


Psalm 119:30 I am determined to be faithful and respect your laws.

I Timothy 6:12 Fight a good fight for the faith and claim eternal life.

I am determined to obey the commands of my God. Proverbs 11:19 Always do the right thing and you will live;


Mark 3:35 Anyone who obeys God is my brother or sister.

Nehemiah 4:6 The people worked hard, and built the walls of Jerusalem


Doing the Right Thing Even Though Everyone Around You Isn’t: