Zones › Reviews › Movie Review: Fly Me to the Moon

Movie Review: Fly Me to the Moon

A review of Fly Me to the Moon, including description of the movie, areas of concern, teachable themes, discussion questions, and scriptures to use. 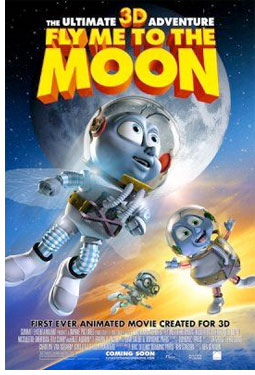 Growing up in a junkyard across the river from Cape Canaveral watching the humans repeatedly fly into space, Nat, I.Q., and Scooter are three "tween" age flies that want an adventure. Bigger flies are going places and doing things that they either aren't allowed or are too afraid to do. Nat gets his adventurous nature from his grandpa, Amos, who is a famous fly that loves to tell the story of how he flew over the Atlantic Ocean with Amelia Earhart. (He even credits the success of this voyage to his flying up Earhart's nose when she accidentally fell asleep.)

Deciding to put aside the favorite phrase of Nat's mother, "Dreamers get swatted," the three plan that on the next NASA mission, Apollo 11, they will accompany the humans and be the first flies on the moon. Without informing anyone except Nat's grandpa of their idea, they suit up and sneak into the helmets of Neil Armstrong, Buzz Aldrin and Michael Collins, and blast off into space.

Meanwhile, back on planet Earth, the Russian flies are not at all excited about the Americans sending the first flies into space. They come up with a plan to put the mission in jeopardy. While in space, Nat, I.Q., and Scooter are blissfully unaware of any danger threatening them or the crew of the Apollo 11.

Will they be discovered? Will the mission to the moon be a success? Could they be left in space? Will the Russian flies keep them from being able to return safely? Actually this movie is pretty tame, with the exception of a few tense moments involving Amos and a fan. (Don't worry... he'll be all right.)

First, I need to let you know that a 3D movie in cartoon is awesome. Some of the effects actually had me reaching into the air in front of me to catch floating globs of juice, or jumping to the side of my seat to avoid being brushed by the rocket as it glided through space. It really was amazing.

On the other hand, because it was a tool that the makers of this movie knew we would enjoy, they tended to have numerous extended 3D scenes that seemed to be longer than necessary and at times boring. I mean you only reach out to try to catch things once or twice, (okay so maybe I did it a few more times than that) until you figure out that there really is no juice floating through the air right at you. It's just an effect.

The historical references are fabulous. The writer, Dominic Paris, seemed to really try to stay true to the actual event of the Americans landing on the moon. He included phrases such as Armstrong's famous quote, "That's one small step for [a] man, one giant leap for mankind," and famous scenes including the first footsteps on the moon and the placing of the American flag. He even added Buzz Aldrin, himself, at the end of the movie to communicate to the audience that there really were no flies on the flight.

I am quite happy to announce that aside from a few "dung" beetles discussing their favorite food and Grandpa Amos making a couple references to alcohol, I can't really think of any concerns I have with this movie.


1 Timothy 4:12 (NIV) - Don't let anyone look down on you because you are young, but set an example for the believers in speech, in life, in love, in faith and in purity.

The biggest and brightest theme in this movie, aside from the historical value of teaching about the Apollo 11 moon mission, would be found in 1 Timothy 4:12. Nat, I.Q., and Scooter weren't adults, or even teens yet, but that didn't stop them from dreaming. It didn't even stop them from going to the moon. Okay, so their mothers were worried and Grandpa Amos was a little concerned, they should have let them in on the decision-making, but they did it. They went to the moon. You don't need to wait to grow up or be teenagers either. God can use kids to do great and powerful things.

Just a few examples include:
1 Samuel 17 - David was just a boy when he fought Goliath.

1 Samuel 3 - Samuel was just a child when God came and stood in his room telling him that he would be the one that God would use to share His message with the people of Israel,

2 Kings 22 & 23 – Josiah becomes king at age 8 and goes on to renew the covenant between God and the nation of Judah.


1 Corinthians 10:13 (NIV) – No temptation has seized you except what is common to man. And God is faithful; he will not let you be tempted beyond what you can bear. But when you are tempted, he will also provide a way out so that you can stand up under it.

Throughout the film, Nat and I.Q. are continually encouraging Scooter to give up his incredible over eating. He is constantly eating while at Grandpa's birthday party, so much so that Nat's mother warns her son not to let Scooter eat all the food.

While in space Scooter gets separated from Nat and I.Q. when he leaves them to drink the juice that is floating through the air. (I think I might have mentioned this scene before.) He is almost left behind in a part of the rocket that is not returning to Earth. His wide girth barely squeezes through an opening Nat finds for them to return to the space capsule. After his safe return, he promises to go on a diet and the movie continues on to show him being successful at it.