A review of The Odd Life of Timothy Green, including description of the movie, areas of concern, teachable themes, discussion questions, and scriptures to use. 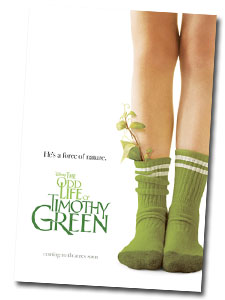 Jim (Joel Edgerton) and Cindy (Jennifer Garner) Green desperately wanted a child. They tried every possible strategy known to medicine, but it was simply not possible. They were infertile. Heartbroken. Forced to move on, except that Jim refused. He broke out his beloved paper and pencils, the instruments of recording so many of his dreams--no, now their dreams. And together they dreamed late into the night of the child they desired: funny, honest to a fault, loving and capable of being loved... They took each piece of paper and put them into a wooden box. They buried it in their yard. They returned indoors and fell asleep in each other's arms, while outside something singularly odd happened.

It was a fantasy-like beginning to a beautiful story. Timothy entered their lives early the next morning, becoming the fulfillment of their dreams, but in ways they could not anticipate. He turned their lives upside down and their small town along with it.

It is reasonable to anticipate oddness in a film entitled The Odd Life of Timothy Green. And odd it is. It is beautiful in its oddness and also frustrating. It is heart-rending and exasperating. It has an important message to deliver, but nearly fails in its quest. While there is fine acting from most of the cast, particularly CJ Adams (Timothy) and Odeya Rush (Joni Jerome, the young girl who understood and befriended Timothy), the script and directing compels a few scenes to devolve into something more reminiscent of Hallmark movies of the week, than a serious theatrical production. Those scenes are the football equivalent of a quarterback telegraphing his passes to his receiver. Utterly predictable. An eye-rolling experience for the viewer. It was jarring to the narrative.

Having pointed out this exasperating weakness, I also wish to note the film's value, particularly to the Kidology community. This film is about parenting. It is about the love of spouses for each other, the challenges of marital communication, dealing with childhood conflict with parents and siblings, reconciliation, the heartbreak of infertility, the inevitability of making parenting mistakes and again, and again, and again...and growing from it, not giving up despite making mistakes while trying to fix mistakes. It is about honesty and life. The lives we lead trying to appear just so to others, when what we really need is simply to be ourselves in our frailty while learning to love those who reject us as a result. In the end, for reasons you will see in the film, it is also about hope.

The Odd Life of Timothy Green will appeal more to adults than children. Its chief target demographic surely is women, but writing as a man to any men who may read this: set aside your assumptions and need for a Bourne fix for a couple of hours. Watch it with your spouse. Then discuss afterward. Be the husband and father, the spiritual leader of your home. Encourage the parents in your church to do the same. Use the discussion questions below, a set of three series of questions for the parents and a briefer set for the kids. I promise that you will not regret it.

Rated PG for thematic elements and brief language, the movie is safe for older children. Younger or more sensitive children might become a bit frightened by severe weather-related scenes dealing with the arrival and departure of the protagonist. Likewise, there are several scenes of arguing which may scare them. The relationship between Timothy and Joni may alarm some parents because they almost kiss at one point and hug at another. Despite being produced by Disney and its child-like sensibility, the plot and themes of this film are primarily targeted toward adults, not children.

For Parents: For Children:

Timothy Green's life was odd. No doubt about it. But taking away the fantasy elements of the story, are we any different than Timothy or any of the other characters, particularly Joni, Jim, and Cindy? We live odd lives in our own right. We make mistakes and wrong choices, and despite our attempts to appear sophisticated and put together, we prove repeatedly our need for grace, reconciliation, hope, and unconditional love. For this reason I choose to overlook the film's shortcomings and instead concentrate on dealing with my own. Will you join me?