A review of G-Force, including description of the movie, areas of concern, teachable themes, discussion questions, and scriptures to use. 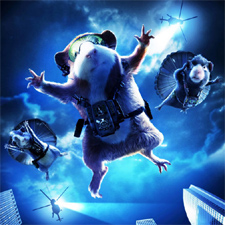 We know that the US government allocates big portions of money for animal-related projects…some more baffling than others. So is the idea of training genetically perfect guinea pigs, and a mole and a fly, to be covert operatives so far-fetched? Could that project merit some stimulus money? Yes! It could happen. Thus, G-Force became a reality…at least on the big screen!

G-Force is a highly-trained squad made up of the leader, Darwin; Juarez, the va-va-voom martial arts specialist; and weapons man, Blaster. Rounding out the team is Freckles, a mole who is a computer expert and, well, a mole…and a fly named Mooch who runs reconnaissance. This expert team is trained to go where no man could go, mainly because man could not fit into the spaces where this team can. Fortunately, this trained squad uncovers a plot that would lead to global extinction. Despite the fact that the government is trying to shut them down due to lack of funding, this team ultimately saves the day and we are all safe to live another day.

This action-packed movie has lots of CGI graphics to catch your eye. It is rated PG, and is definitely not for young kids because there is a bit too much violence- although not graphic. When I went to see it several smaller children in the theater got really scared, cried and had to be taken out. My six-year-old niece hid through a lot of it, and my twelve-year-old niece got bored. I have to say that most of the funny parts you see in the commercials. It wasn’t a bad film, but sometimes you ask yourself was it really worth paying to see it in the theater…or just wait for the rental.

On the positive side, this team is dedicated to each other and work for each other’s good. Each member has a talent…and gains respect for that talent. When a silly guinea pig from a pet store inadvertently becomes part of G-Force, they commit to him, as well. The team eventually finds out that they were not genetically altered and are in fact just normal guinea pigs, but this does not get them down, rather makes them more determined to do their best.

There are quite a bit of butt and fart references and jokes about the bowel movement habits of guinea pigs.

As mentioned above, there is violence in this movie, but no blood. There are horrific car wrecks, explosions...everything you would expect in an action movie...however, no dead bodies.

When the evil plot Clusterstorm begins, ordinary household appliances turn into mean, violent, killing machines. This could cause some nightmares. Again, no blood, no death.

Juarez, the female guinea pig, is found desirable by the other guinea pigs. While they ogle her and vie for her affections, she just looks like a guinea pig and not alluring to the human eye. No Jessica Rabbit here. While you could probably count this as sexual content…I thought it was kind of humorous because they did nothing to enhance her “womanly ways.”


Each member of the G-Force team had a special talent. Each member was an important part of the whole necessary to complete the task.


When Freckles is found to have been a double agent, when he repents the team helps him to straighten things out.


G-Force was told that they were specifically, genetically-engineered to do their jobs. When they find out that this is not true, they realize that they are special for who they are.


G-Force had the option of becoming pets and not trying to do the work they were called to do, instead they chose to save the world.


Ecclesiastes 4:9-10 “Two people are better off than one, for they can help each other succeed. If one person falls, the other can reach out and help. But someone who falls alone is in real trouble.” (NLB)


Colossians 3:13 “Make allowance for each other’s faults, and forgive anyone who offends you. Remember, the Lord forgave you, so you must forgive others.” (NLT)


Deuteronomy 31:6 “So be strong and courageous! Do not be afraid and do not panic before them. For the Lord your God will personally go ahead of you. He will neither fail you nor abandon you.” (NLT)

I love summer movies, and I don’t think that all children’s movies need to be cinematic masterpieces. This one definitely isn’t, but it is a lot of fun and action-packed. It provides great lessons in ordinary folks doing extraordinary things, teamwork and using your talents for good.