A review of Rango, including description of the movie, areas of concern, teachable themes, discussion questions, and scriptures to use. 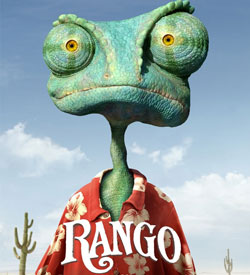 Rango is a pet chameleon who has lived his entire life within the safe confines of a glass terrarium. Yet, he aspires to be a swashbuckling hero, acting out his fantasy by telling stories of daring to his inanimate companions. Yet he senses something is missing, something meaningful to his stories. Conflict. Yes, that’s it. He needs conflict—and then, even as he utters that proclamation, he and his habitat are tossed out the car window due to a near accident, landing on the desert floor of the deep Southwest. He immediately meets a wise armadillo who directs him to Dirt, a Western town plagued by water shortage and bandit abundance. What they need is a sheriff. After some fast-talking about imaginary exploits, and a run in with a hawk, which leaves his avian adversary beak down in the hardened soil, Rango is a clear shoo-in as the town’s lawman.

And that is where his real problems begin. Now he must live up to the hopes which the townsfolk, a menagerie of various desert critters, have placed him. Soon, the town’s water supply is stolen. Panic ensues. Rango musters a posse. As they ride out, one of his companions asks, “Where are we going?” Where, indeed? Now it was time for Rango to live up to the hype of his imaginary stories. He does, for awhile, only owing to the haplessness of his adversaries, and the accidental good fortune of his own posse. But in the end, he is found out, exposed, revealed as the fraud he is. Shamed, he walks out of town. Although his suspicions as to who the real mastermind of town’s stolen water supply hinted at redemption, he had already lost credibility with his people. Their hopes were dashed.

And that is when he encountered a Clint Eastwood-like sage on the other side of the highway, who told him, “You can’t walk out on your own story.”

Rango took the encouragement to heart, owning up to his failures and deceit, taking on the true bad guy, recovering the water for the town, and regaining the respect of the townsfolk of Dirt.

Rango is rated PG, which seems to be an appropriate rating, so long as parents take it seriously. Parental guidance is suggested in choosing whether to view the film.

There are several instances of the word hell used as a curse word. Plus there is another harsh swear word which I will refrain from repeating here. Although the words may seem in character for a Wild West theme, parents will want to decide whether they want to expose their children to them.

There are also scenes of violence, menacing, an especially scary looking snake who steals the show as a bad guy, and numerous scenes of peril. Younger children may become frightened.

Rango is genuinely a great movie for most of the family. I encourage parents to consider the age and sensitivity of their children as they make a decision whether to view it. The themes will speak to young and old alike, but probably more so to those who have maturity to grapple with abstract concepts such as the imagination, lying, shame, responsibility, and redemption. Younger viewers may need assistance to notice the subtleties of the plotline and interacting themes.