A review of Harry Potter and the Half-Blood Prince, including description of the movie, areas of concern, teachable themes, discussion questions, and scriptures to use. 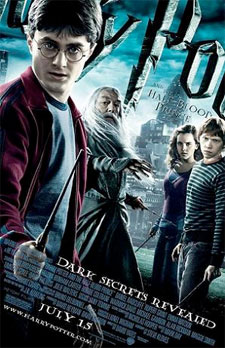 It's time to move on from the cute magic tricks and cartoon-like caricatures we've grown to be familiar with over the past five Harry Potter movies. The war between good and evil in the wizarding world is in full force once again, and the fate of the world depends on finding out how to destroy Lord Voldemort.

Harry Potter and the Half-Blood Prince is a departure from the previous movies. Rather than focusing on the magic and the duels and the rivalry between Harry and Draco, Half-Blood Prince tells more of the story of Voldemort when he was still Tom Riddle and a student at Hogwarts. You delve into memories of Dumbledore encountering Tom as a child at an orphanage where he is recruited for admission into Hogwarts. Memories of Tom winning over the graces of various professors. Memories of Tom discovering how to make himself practically immortal through the forbidden dark practice of using Horcruxes, which are objects in which you store part of your soul after it has been torn apart through the act of cold-blooded murder.

This last memory, which Harry coaxed from a potions professor (Horace Slughorn) who naively informed Tom Riddle about Horcruxes opens the key to destroying Voldemort. Dumbledore and Harry discover that Voldemort has split his soul into seven parts, placing them in seven horcurxes. In order to defeat Voldemort, all seven horcruxes must be destroyed. Two of them already have been: Tom Riddle's diary from Harry Potter and the Chamber of Secrets and a ring that had been buried with Tom's mother which Dumbledore found between this story and the previous one.

This movie climaxes when Harry and Dumbledore return from retrieving the third Horcrux in which Dumbledore is severely weekened. Dumbledore orders Harry to hide and Draco Malfoy shows up to kill Dumbledore. Draco had been coerced by Voldemort to carry that out. While Draco hesitates, Professor Snape arrives on the scene and kills Dumbledore himself. Yes, you read correctly... Dumbledore dies.

The movie concludes with Harry, Hermione and Ron determined to not return to Hogwarts but to search out the remaining Horcruxes and destroying them. Without the help of Dumbledore and the discovery that the Horcrux Harry and Dumbledore retrieved was a fake, the task of destroying Voldemort has become grim.

While this movie is PG, it is pretty dark. You get a glimpse into the sociopathological mind of Tom Riddle before he became Voldemort. There is also a scene where Harry tries out an unknown spell on Draco, which leaves Draco lying on the ground in a blood-soaked shirt and blood-stained puddle of water. Something else that might be unsettling to younger children is when Harry and Dumbledore go to retrieve a Horcrux from a sea cave. At one point, Harry reaches into the cave lake to get a drink of water for Dumbledore when a hand pops out of the water and grabs Harry's hand. It turns out one of the traps Voldemort left in that cave was bewitched corpses (zombies) that drag Harry into the lake to drown him. While Harry is saved by Dumbledore, the image of Gollum-like creatures weighing Harry down to the bottom of the lake has the potential of being pretty scary for young children.

Being that Harry and his friends are 16 in this movie, there is a lot of boyfriend/girlfriend conversations as well as a good amount of couples "snogging" (making out). The kissing isn't overly graphic, but it is there.

On a purely subjective note, some people may be bored with the movie because of the lack of the magic and spells and action and whimsy found in the previous movies. There is also the potential to be confused about aspects of the movie if you are unfamiliar with the previous stories as well as the book on which the movie is based.


You see Professor Albus Dumbledore and Professor Horace Slughorn regret that they didn't realize that Tom Riddle was going to become Lord Voldemort, the most powerful dark wizard of all time. They each wished they could go back and change the past: Dumbledore keeping Tom from ever coming to Hogwarts and learning how to use his magical abilities and Slughorn keeping from ever telling Tom about Horcruxes. Professor Slughorn was even shamed to the point of originally altering his memory of telling Tom about Horcruxes so no one would think poorly of him.


At one point, Ron begins dating a girl because she "throws herself at him." The relationship is more about kissing and being lovey dovey rather than about true friendship. After a few weeks, Ron confesses to Harry that he wishes he was no longer dating the girl. When Ron is poisoned and unconscious in the hospital, he calls out for Hermione whom he has been friends with for the past six years and is someone who truly cares for and about him. There is also talk about how one feels when they see the person they care for in a relationship with someone else.


Psalm 103:8-12 "The Lord is compassionate and merciful, slow to get angry and filled with unfailing love. He will not constantly accuse us, nor remain angry forever. He does not punish us for all our sins; he does not deal harshly with us, as we deserve. For his unfailing love toward those who fear him is as great as the height of the heavens above the earth. He has removed our sins as far from us as the east is from the west."


Proverbs 3:5 "Trust in the Lord with all your heart; do not depend on your own understanding."


Proverbs 4:23 "Guard your heart above all else, for it determines the course of your life."

1 Corinthians 15:23 "Don't be fooled by those who say such things, for 'bad company corrupts good character.'"

1 Corinthians 13:4-7 "Love is patient and kind. Love is not jealous or boastful or proud5 or rude. It does not demand its own way. It is not irritable, and it keeps no record of being wronged. It does not rejoice about injustice but rejoices whenever the truth wins out. Love never gives up, never loses faith, is always hopeful, and endures through every circumstance."

Personally, I enjoyed the movie. (If you've read my previous reviews on the other Harry Potter movies, you wouldn't be surprised.) The purpose of the movie was to further the storyline leading up to the ending of the Harry Potter series. I think it did a good job of that.

Every child is different but I would not recommend this movie for children younger than age 10.