A review of Coraline, including description of the movie, areas of concern, teachable themes, discussion questions, and scriptures to use. 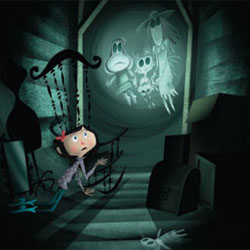 Coraline Jones is miserable. If the angst of being 11-years-old was not enough, her parents moved her from Pontiac, Michigan to the very rundown Pink Palace Apartments somewhere in Oregon. She left her friends behind. Her parents are so absorbed with their work that they don’t have time for her…or unpacking…or cleaning…or cooking a decent meal, which it really appears that they are incapable of anyway.

The Pink Palace Apartments consists of three units. On the top floor is circus performer, Mr. Bobinsky, who is just plain weird. In the basement are the elderly Miss Spink and Miss Forcible, described as former actresses but the posters from their past look more like burlesque.

When Coraline’s father tells her to explore the house, rather than disrupt him, she does just that. She counts windows and bugs and doors. In the living room she finds a small door, but when her mother helps her to open the door she finds nothing but bricks behind it. Later that night, she is awakened by some mice who guide her back to the door behind which she finds a passage to a parallel universe…well, at least a parallel Pink Palace Apartment building. Everyone looks the same, except for having buttons in place for eyes. No one acts the same. Her parents are perfect, downright doting on her….and they are now amazing cooks! The elderly actresses are incredible entertainers (we’ll get back to this). Mr. Bobinsky is an amazing ringmaster of an amazing circus with amazing performing mice. The Pink Palace Apartments are beautiful.

The grass is not greener at this end of the tunnel. Her button-eyed mother is actually a witch of sorts who has, through the years, killed children. We know this because their ghosts are in the walls of the house. Her goal is to kill Coraline and give her button eyes, too. In the end, Coraline matches wits with the witch, saves her real parents who were trapped in a snowglobe, and frees the little ghosts who turn into angels. I am not making this up.

Coraline is based on the international best-selling horror novella of the same name written by English author, Neil Gaiman. The book has won many awards including the Publishers Weekly Best Book, Child Magazine Best Book of the Year, ALA Notable Children’s Book and ALA Best Book for Young Adults. Of Coraline, the author states, "It was a story, I learned when people began to read it, that children experienced as an adventure, but which gave adults nightmares. It's the strangest book I've written, it took the longest time to write, and it's the book I'm proudest of." The New York Times critic, Charles Taylor, says it is “one of the most truly frightening books ever written.”

In my multiplex, Coraline was playing across from The Uninvited. You would never see me going into that movie. The posters and trailers for The Uninivited clearly told me what that movie was about. I don’t mind some dark movies, but I don’t do horror well. Coraline is being marketed as a children’s movie. I would not take a child to it. It is a horror movie! I don’t think you would have gotten that from the trailer. It is downright creepy. I wish I didn’t have those images in my brain.

As far as language, Coraline misuses God’s name several times. There is some name-calling. Coraline’s Mom makes a statement at one point that her husband is drunk.

As for sexual content, in the “other world” the elderly, rotund Miss Spink and Miss Forcible put on a show in which Miss Spink is wearing a bra and mermaid bottoms, and Miss Forcible? She has on a thong and pasties! I am not making this up either! Coraline makes a statement to the effect that they are barely naked. It wasn’t funny. It was grotesque and horrifying!

As far as spiritual elements, there are witches, ghosts, dowsing rods, divining rocks, monsters and lots of other things to invoke horror. Miss Spink and Miss Forcible read tea leaves to tell the future.

I write this review with this disclaimer. This is a well-advertised film and I am sure that many of our children will see it. I would definitely not take children to this movie. I personally believe that because of the content, it should not be used in Children’s Ministry. I would really be concerned about using it as part of a lesson, mainly because that looks like “the church” is endorsing a film that is really not good for children. I revert to the rule that what I may excuse, others may abuse in excess. A child may see this movie at church and because of that watch it at home, and seeing that their church leaders use it as an example, may think that this movie is okay to watch in its entirety.

As bothered as I was about elements of this movie, I was struck by how much this looked like temptation that leads to sin. The temptation always looks so good. We yield to the temptation and at first, everything is wonderful. Then, we become enslaved to the sin and must fight to get away from it.


1 Corinthians 10:13
“The temptations in your life are no different from what others experience. And God is faithful. He will not allow the temptation to be more than you can stand. When you are tempted, he will show you a way out so that you can endure.” (NLT)


Philippians 4:10-12
“I rejoice greatly in the Lord that at last you have renewed your concern for me. Indeed, you have been concerned, but you had no opportunity to show it. I am not saying this because I am in need, for I have learned to be content whatever the circumstances. I know what it is to be in need, and I know what it is to have plenty. I have learned the secret of being content in any and every situation, whether well fed or hungry, whether living in plenty or in want.” (NLT)

I personally like to read fairy tales. Not the Disney versions where everything works out in the end, but the Brothers Grimm and Hans Christian Anderson…the latter being someone I don’t know that I would want to meet! While sometimes these stories are dark and scary, I would never describe them with the word, horror or terror. I just don’t understand how those words go with anything childlike. It is so unfortunate that this film is being marketed to kids…and parents are taking their children to see it because they don’t investigate in advance.

The movie itself is very well-made. Director and screenwriter, Henry Selick, has brought us some dark (but fun) tales before with The Nightmare Before Christmas and James and the Giant Peach. The film is wonderfully made in stop-motion animation…an amazing feat in and of itself. Of the movie Selick has said, "It will be as dark in moments, but also funnier and lighter in others. It will have a little more balance," Selick says. "The screenplay is less creepy [than the book.] It's not so much about a Goth-girl who finds a world exactly like that; it's more of a Hansel and Gretel seduction into a place that appears to be colorful and wonderful, but turns out to be something more challenging for her, so to say."

To sum up my reaction to the movie? It is extremely creepy!