A review of G.I. Joe: The Rise of Cobra, including description of the movie, areas of concern, teachable themes, discussion questions, and scriptures to use. 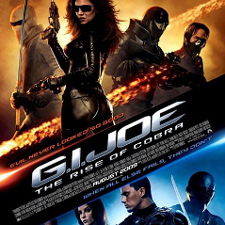 Rated PG-13, this movie is not one for the younger children. But if you have an older group that likes the high action and great graphics this may be the movie for your group.

I grew up playing with GI Joe's (the large ones not the small action figures), they are even coming back as “CLASSICS”. I enjoyed watching the cartoons and reading the comic books, so it was nice to see a live action picture of them.

The action scenes are really well done and there are a lot of them, in fact there are five huge action sequences and several independent scenes. There is the incredible scene in Paris in the middle of the film that is just mind-blowing. There is also a great ambush scene in the woods, a great training sequence, an attack on the “The Pit” and a huge underwater sequence at the end. While some expensive action films make it impossible to follow what’s going on, G.I. Joe is easy to follow. I never lost track of who was where or what they were doing.

The best part about this film is that it tends to sneak up and surprise you. Many will be going in with low expectations: hoping to see a lot of CGI, cheap dialogue and lots of action. In the trailer, the “accelerator suit” scene looked like it would be very fake and cheesy when you see clips but this turned out to be one of the coolest scenes in the film. Obviously, a G.I. Joe film is not going for realistic elements, so everything about the scene is far-fetched. Bottom line: it’s just really cool. If you expect more than "makes no sense" action, this is not your type of movie.

The cast is not going to win any Oscars, but for a movie like G.I. Joe, it fit well. The film had to have some corny jokes and goofy moments but the cast was good at delivering this feel. If, on the other hand, it was a hard-nosed, gritty action flick; the cast would have been horrible. But, it works for what you see.

The story is the exact type of story you would expect for G.I. Joe. It has to be a global threat, something that only the Joes could stop (the bad guys want to destroy certain cities/important monuments/take over the world and the good guys are trying to stop them), and of course, end with a set up for sequels. Mission accomplished. Again, screenplay is not going to win any awards, but it is a G.I. Joe picture and it seems to work for them.

G.I. Joe has a great paced, for a movie that is 1 hour and 45 minutes it never stalls. It gives enough back-story to certain characters at moments when we need them, but never gets hung up on character development. Even the first half of the film, as we are learning about the Joes and seeing the “new guys” getting use to this ultra-secret unit it does not loose pace or give you that feel of “let’s get on with it”.

Snake Eyes/Storm Shadow stuff will make the fans very happy. Not only do you get a great battle between them in present day, you learn how they met and see a solid fight between them as kids.

The movie is cheesy but fun. The dialogue is corny and everyone was either a good or a bad guy, but that’s the cartoon element. It never went for the really cheap joke or any bathroom humor. Of course, you get the typical line from G.I. Joe – “ … and knowing is half the battle”

We’ve already discussed how you should not expect realism from a G.I. Joe film, but that’s no excuse not to be creative with the writing. There are a few instances in the movie that really seemed like a little more brain-storming could have come up with an equally cool, yet more believable, scene.

Basically, this is what a fun summer high action/comedy should be.

The biggest problem, for the younger kids, is the film is too violent and complicated to be a PG-13. Yet it has some corny jokes and moments that were clearly geared toward them. It wasn’t as gritty a film as The Dark Knight. Overall, this film is not really appropriate for a younger crowd. Even though most of the violence is implied, it is also pretty obvious.

That being said, a lot of the corny jokes are just meant to make G.I. Joe a fun movie and that’s exactly what they do. There are just times that it was clear the film put on the façade of a kids’ movie.


Even when the circumstances seem impossible we must always stand up for what is right.


Every member must contributes 100% with their ability and talents to make the entire team a success.

If you see this movie in theaters, don't expect to use your brain. This is mindless action with some comedy sprinkled on top. Please do heed the PG-13 warning and seriously consider whether you want to take a young kid to this film. It is rather violent and a bit complicated for young children. But, G.I. Joe: The Rise of Cobra is exactly what it should be - a fun summer action/comedy that nearly everyone will enjoy.