Movie Review: Night at the Museum: Battle of the Smithsonian

A review of Night at the Museum: Battle of the Smithsonian, including description of the movie, areas of concern, teachable themes, discussion questions, and scriptures to use. 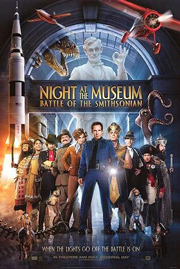 Former night watchman, Larry Daley, is an up and coming inventor...entrepreneur...CEO...who is hawking his inventions on late night infomercials. The money is rolling in, so, what could keep him from the biggest deal negotiation in his life...at Wal-Mart no less? A call saying that things are not going well back at the Natural History Museum in NYC, his former employ. That's all it takes, and off he goes to encounter living and breathing museum exhibits that have no business living or breathing. Thus begins the sequel to the very popular Night at the Museum.

The museum is modernizing and no longer needs as many displays. Exhibits from the museum are being crated up and are destined for permanent storage in the famed federal storage that we learned all about from Indiana Jones. In their one last night at the museum the capuchin steals the magic tablet that makes everything come to life at night and it goes with him to D.C.. When everything wakes up at the Smithsonian the next night, Larry gets a call for help that eventually changes his life.

The cast of characters is enormous. There is everyone from Amelia Earhart, Teddy Roosevelt and the Tuskegee Airman to Abraham Lincoln, General Custer and Albert Einstein. Portraying them is enormous talent from Robin Williams and Amy Adams to Hank Azaria and Owen Wilson. A cameo appearance by the Jonas Brothers was a funny touch as the JoBros are cherubs singing BeeGee's songs- there is irony there!

Night at the Museum: Battle of the Smithsonian has not garnered the best of reviews. I tend to think that is because so many critics don't get children/family movies. This is not a Cecil B. DeMille production. It is entertaining. The special effects are incredible. It is everything that a good summer movie should be. Action...adventure...laughs...it is all there. There is also a great moral at the end when Larry realizes, "The key to happiness is doing what you love with the people you love." I think this movie was as good as or better than the first.

There are a few profanities uttered and God's name is misused several times. There is some mild sexual innuendo that would no doubt fly way over the heads of most children who see it. There is a small bit of romance...and slapstick sort of violence. There are swords, knives and other weapons, but there are no casualties in this film. Towards the end of the movie the über bad guy, Kahmunrah, gets thrown into the underworld and turns to dust, but this is not graphically portrayed.

To gain access to the Smithsonian, Larry steals an ID from another guard. Teddy Roosevelt at one point says, "Sometimes it's more noble to tell a small lie than deliver a painful truth."


Even when the odds seem against us, we should strive to overcome evil with all our might.


When Larry did not know what to do he went to Teddy Roosevelt, Albert Einstein and others for counsel.


Even though things can go horribly wrong, they can work out for our good.


Larry thought that he wanted to make lots of money and be a big inventor, in the end he finds more satisfaction doing the work he seems "called" to do.


While there are times in life that we need to be able to stand alone, there are more times when we need to join with others to work out problems.


In this movie each character had individual abilities that when used in a timely manner helped solve the problem.


Colossians 2:15 "In this way, he disarmed the spiritual rulers and authorities. He shamed them publicly by his victory over them on the cross." (NLT)


Acts 11:29 "The disciples, each according to his ability, decided to provide help for the brothers living in Judea." (NLT)


Proverbs 12:15 "Fools think their own way is right, but the wise listen to others." (NLT)


Deuteronomy 31:6 "Be strong and courageous. Do not be afraid or terrified because of them, for the LORD your God goes with you; he will never leave you nor forsake you."." (NLT)

I live 100 miles from Washington, DC, and although I have been there tons of times this movie made me want to go back to the Smithsonian. So often we skip these kind of experiences with kids in favor of bowling or miniature golf. In the end, I would encourage you, don't miss the opportunity to go to a museum. Maybe you have never done this before because it doesn't seem so kid-friendly. Even an art museum can be fun when you encourage your kids to go in a room, find the piece they like the best, and talk about why. History is a great teacher, and we should not overlook that in raising children.

This is a great family movie. Buy some popcorn, sit back and enjoy!