A review of Winnie the Pooh, including description of the movie, areas of concern, teachable themes, discussion questions, and scriptures to use. 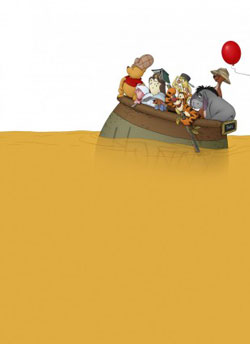 Winnie the Pooh wakes up on cue. Almost. Okay, not quite. As the film opens, he requires a bit of prompting from the narrator, even to the point of his house being turned upside down. But finally he does wake and not a moment too soon because his tummy begins to quake. After searching each honey pot in his home, Pooh realizes it is all gone! So, off he goes in search for his beloved mealtime fare, only to be distracted by Eeyore’s despair. Eeyore has lost his tail! Now he is grumpy and sad with no tail to wear! When Winnie the Pooh and his friends try to help Eeyore, they realize that Christopher Robin has been abducted by the Backson, a huge creature of indescribable (because he doesn’t really exist, except in the vivid imagination of the Owl, who misreads Christopher’s painfully misspelled note) scariness.

So begins this adventure of Winnie the Pooh and his companions. Written to appeal to preschool age children, the film recovers the whimsy found in Disney films of old. It clocks in at barely over one hour (1 hour, 9 minutes), which is just about right for its intended audience.

Winnie the Pooh is a tale of friendship, priorities, and the joy of living each day to the full.

The film is rated G. The imaginary Backson monster might cause a bit of fright for very young sensitive children. The issue is quickly resolved to reveal the monster does not exist, but some children might still become fearful.

Also, Eeyore is very negative throughout the film, in keeping with his character in the books. Parents could use this as an opportunity to explore with children the consequences of negative attitudes.

The film has several points where typical storytelling conventions are overruled, such as the characters interacting with the narrator and with pages, words, and letters from the book. Some children might not completely understand the symbolic nod to the story’s literary roots the filmmakers hope to invoke.

Pooh and his friends are quick to help out Eeyore and Christopher Robin. They stick together as friends and figure out ways to use their respective abilities to solve their problems.

Pooh really, really wanted some honey to ease his grumbling tummy. But in the end, he did the right thing and helped Eeyore reunite with his tail, even though he could have first had some honey.

Winnie the Pooh is a sweet romp into the world of Pooh and his friends. It is full of music, humor, just enough conflict to keep things interesting, and above all, friendship. Although most movie-goers seem to have opted for other current releases on the day I viewed the film, Pooh is definitely worth a look for families who miss the age of innocence in the theater.