A review of The Green Hornet, including description of the movie and areas of concern. 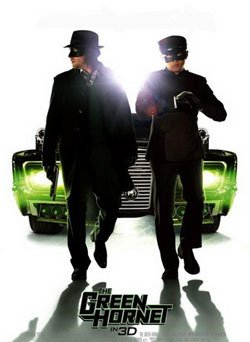 This 119-minute, PG-13 Rated (although there is a very thin line to cross before getting to the R rating) Action/Crime/Thriller suffered from excessive language/profanity, violence, too many dud jokes, and adolescence crude humor. Seth Rogen plays Britt Reid aka The Green Hornet. This Britt Reid nor The Green Hornet is very likeable. Britt comes across as a spoiled rotten, clumsy, unshaven sex crazed/womanizing playboy. The Green Hornet comes across as a low class, bumbling, also unshaven and even laughable second class hero. He is always putting down and mentally abusing his loyal masked partner Kato played by Jay Chou. Kato takes a lot more abuse than most folks would put up with before walking out on his employer and fellow masked crusader in a rather extensive fight scene through the lavish house of the Reed estate. Kato actually comes across as more serious and down to earth than his staring lead. Cameron Diaz plays Lenore Case, a no-nonsense, adult in the middle of a life change. She displays more brains than her playboy boss Britt Read, who uses that intelligence to plan out Green Hornet activities.

Tom Wilkinson does a good job in the supporting role of Britt Reid’s father and newspaper magnate James Reid. In the original series the District Attorney assisted the Green Hornet but in this production David Harbour plays the corrupt District Attorney Scanlon.

Christoph Waltz is one of the strongest characters in the film. He plays the role of Chudnofsky and Bloodnofsky, the evil mobster boss of Los Angeles. Edward James Olmos (Commander Adama from Battlestar Galactica) is the managing editor of Reid’s newspaper the “Daily Sentinel.” His role could have been stronger in the movie and would have added a stabilizing balance on Britt life.

There is plenty of action, car chases and crashes in this comic book story, but it’s almost lost in the silly humor. Car enthusiasts will of course be thrilled with the various custom-made and heavily armed bullet proof cars in this flick. The action is paced throughout the picture although at time it appears to be too intense for the PG-13 rating. Those familiar with the TV series from 1960’s may find some similar story lines and even dialogue.

This is definitely a movie with a target audience of teenage boys, a “BRO-mance”. Technically, the film is well done. The special effects are excellent, but the IMAX 3-D wasn’t needed. The action scenes are dramatic and keep the audience attention. However, the dialogue is very predictable.

Concerns
I would not recommend this movie to draw life lessons from or find character examples since other movies would be a better choice. However, you can find some redeeming qualities throughout the picture. In the opening scene you have a dialogue between James (father) and Britt (son) Reed. This sets the tone of a distance and unloving relationship between the father and the son which continues through the movie. The struggling friendship between Britt and Kato can be used to contract qualities of a good friend and one that has friends only for their own benefit. One additional lesson can be pulled from Britt learning to trust and rely on his friends. All through his life he was typical spoiled rich kid, now he has to rely on his friends to help him in life. The one lesson we can pull from this movie is the contrast of how Jesus is a friend that sticks closer than a brother.

Conclusion
One closing comment, you may notice a picture of the Lone Ranger during the movie. In other adaptations of the GREEN HORNET story they reveal that the Reed family is descendants of his. This gives Britt the desire to see right in the midst of all the wrong doing.