Mickey, Donald, and Goofy star in an animated version of The Three Musketeers. Not a cartoon masterpiece, but a film that possesses good teaching points about teamwork and the body of Christ. 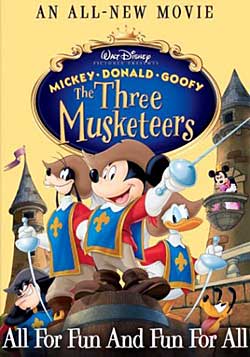 Background
For some odd reason, I looked forward to the release of Disney's The Three Musketeers. Could it be true that Mickey Mouse would be back on the big screen? After all, the last time Mr. Mouse was given the film treatment was the 7-minute 1995 short, Runaway Brain (shown before the movie A Kid in King Arthur's Court). We haven't seen much of him in today's media, other than various television clip shows like Disney's House of Mouse.

In fact, many of the cartoons that shaped Mickey's character have been locked up in the Disney vaults for years, keeping today's children from experiencing the wholesome character's adventures long before he became a corporate icon. Only recently, through limited-edition DVD releases such as the "Walt Disney Treasures" series has another generation had the opportunity to appreciate Mickey's growth from Steamboat Willie (1928) up through his last mini-film outing, 1990's 20-minute short, The Prince and the Pauper.

Advertisements leading up to this film's release heralded it as the "first full-length feature starring Mickey, Donald, and Goofy." At 68-minutes long, I'm not sure it qualifies as feature-length, but kids of today have short attention spans (at least the folks at Disney think so). But alas, somewhere along the line, The Three Musketeers was removed from the theatrical release schedule and sentenced to be a direct-to-video release. There were many reasons for this change, which included the misplaced mindsets of executives, retailer pressure, and a movement by The Walt Disney Company to abandon all traditionally animated projects in favor of computer animation.

Unlike other classics such as Snow White and the Seven Dwarfs or even Beauty and the Beast, which were drawn by master craftsman, this film was produced by Disney's television animation division in Australia (DisneyToon Studios). Places like this primarily produce low-budget television shows and film sequels (Bambi II, anyone?). Even with the limited resources this film was given, it turned out to be a rather pleasant movie with applicable morals. Actually, given the short length, it felt almost VeggieTales-like in approach. Visually, the production quality of the film isn't at the level of the classic animated films, but it doesn't burn out your retinas either.

The Story
With all that backstory out of the way, this new version of The Three Musketeers casts Mickey Mouse, Donald Duck, and Goofy very loosely in the roles of Alexandre Dumas' classic tale. However, from the very beginning we are told that this won't be a traditional fairy tale like other Disney adaptations; rather, this film follows a fun-loving comic book approach. Our classic trio of heroes are put in the roles of janitors who can't seem to do anything right, but desire to one day be just like the Musketeers.

The head of the Musketeers, Pegleg Pete (long a villain in early Disney shorts) has a secret plot to kidnap Princess Minnie Mouse and become king himself. When Minnie sees an attempt on her life (by the humorous Beagle Boys of Disney comic book fame), she demands more protection by having Musketeers assigned as bodyguards. Pete is more than happy to oblige by promoting Mickey, Donald, and Goofy to her side. Given their track records for bumbling jobs, he figures it won't be a problem to carry out his evil plot. Of course, being a Disney film, in the end our heroes save the day, learning lessons about teamwork (you know, "All for One and One for All!").

To liven up the film, a turtle narrator breaks up the action by singing "rousing songs featuring comical spins on classical music by Beethoven, Tchaikovsky, and others." In other words, the creators wrote humorous lyrics to familiar tunes to help explain the action.

Application for Ministry
I'm no theologian, but I would imagine this film could be used very effectively when teaching about the different parts of the body of Christ. There is a certain Wizard of Oz-like element to the movie, where each of the Musketeers possesses a different shortcoming to move beyond (Mickey lacks height, Donald is a coward, Goofy isn't too bright). Eventually by the end of the film this team learns to use their gifts together to overcome each of their weaknesses. Unified, they are able to save the princess and stop Pete from his dastardly plans. From a Biblical standpoint, this film can easily support the teachings of Romans 12, emphasizing that we are all part of the body, but given different gifts and talents.

Even though the film was released direct-to-video, it does contain an MPAA rating of G. Watching through it, I found it very clean and family-friendly. The only issue with language was a snide comment made during a musical number about kicking someone "in the derriere."

One More Thing
Disney introduces a new feature on this DVD called "Disney's FastPlay" that brings your attention to rather poor parenting, I believe. FastPlay basically treats the DVD like a VHS video tape, so a parent won't have to touch the remote once they pop the disc into a player. By default, the disc will play previews, the movie, and various bonus features without having to navigate a main menu. The only way to break out of this is by choosing to hit the MENU button right as the disc starts up.

Besides being an insult to the flexibility and technology of the DVD format, I feel that FastPlay supports the idea that a movie should be a virtual babysitter for kids. A parent can just pop the film in and be done with it, avoiding all that quality time stuff. On the positive side, however, if you have a DVD player installed in a vehicle, FastPlay can help you keep your eyes on the road!

Bottom Line
I'd recommend The Three Musketeers as a good family flick to watch, both at home and in a church environment. The film is humorous, showcases some fun music, and once again brings classic Disney characters to the forefront. Unfortunately, it's not a film masterpiece, but it is a step in the right direction.