This much-anticipated movie starring the world's most favorite yellow sponge was a great disappointment to this SpongeBob fan and proves inappropriate for younger viewers. 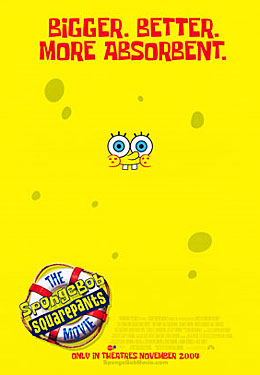 Arr! Man the lifeboats! Swab the decks! Hoist the mainsail! We've found the treasure! Make sail for... the movie theater? At least that's what the pirates do at the beginning of The SpongeBob SquarePants Movie. SpongeBob has become a multi-million dollar icon with merchandise ranging from stationery and sheets to toothbrushes and tattoos. You can even log onto the Nickelodeon website and pay to have SpongeBob call you with a personal message. The TV show attracts millions of viewers in the U.S. and U.K. ranging from 2 to 42 years old. It was inevitable that a movie would be made. Unfortunately, Nickelodeon's frail attempt at launching the movie career of the world's most optimistic yellow fry-cooking sponge failed to meet the expectations of this fan of the TV series.

Synopsis
The movie's plot is simple. Mr. Krabbs has decided to open The Krusty Krab 2 in order to meet the overwhelming demand for the irresistibly delectable krabby patty. When Spongebob fails to be named manager of the new restaurant, he goes on an ice cream eating binge with his ever-so simple pink friend Patrick Star. In the meantime, Plankton, a tiny, one-eyed green villain, hatches his most diabolical plan, Plan Z, to steal the krabby patty secret formula and rule the undersea world. Plankton manages to steal King Neptune's crown and frame Mr. Krabbs. As King Neptune gets ready to fry Mr. Krabbs, SpongeBob offers to retrieve the crown from Shell City, a place where no one has ever returned from. The rest of the movie consists of SpongeBob's and Patrick's adventure to Shell City while being chased by a hit man, avoiding being eaten by sea monsters and being saved by David Hasslehoff.

Personal Take
Being a fan of the creative humor used in the television series, I had high expectations for The SpongeBob SquarePants Movie. When the closing credits began to roll, I was wishing the movie had ended after the audience was treated to a remake of the SpongeBob theme that gave it a "Pirates of Penzance" feel at the beginning of the movie. It was as if the writers were creatively challenged to come up with something that would last longer than the 20 minutes of a normal cartoon episode. In addition to the movie being drawn out, the writers ruined the movie's appropriateness for children by interjecting some inappropriate hints at violence and sexuality. Regardless of what is said about the movie, though, child fans of SpongeBob will want to see it. Because of the lack of quality and inappropriate innuendoes, I am unable to recommend this movie.

Negative Aspects
Whether you like it or not, all kids find bare bottoms, bodily functions and the word "poop" to be funny, and the SpongeBob TV series has been able to successfully capitalize on this. Unfortunately, The SpongeBob SquarePants Movie takes this kind of humor too far and many times crosses the line into humor that is inappropriate for young children. There is one scene where Patrick is parasailing over a crowd at the grand opening of the Krusty Krab 2 with a pole wedged in between his... let's just say held by the muscles that form his backside... holding a flag saying, "SpongeBob SquarePants." After Patrick crashes into the stage, he asks SpongeBob, "Did you see my butt?" Not only did potty humor go too far, but innuendoes and slapstick-type violence tread real close to the line that distinguishes SpongeBob from those cartoons found during the Adult Soup time period on Cartoon Network. There was a hit man after SpongeBob who tore the lips off of some smart-aleck gas attendants. There was also one scene where Patrick shows up in knee-length black leather boots and black fishnet stockings. The movie was sadly peppered with scenes such as these.

Positive Aspects
Throughout the movie SpongeBob is told that he can do nothing of importance because he is "just a kid." In spite of that, he bravely (sometimes stupidly) goes on a noble journey to save Mr. Krabbs even though Mr. Krabbs had overlooked him for a well-deserved promotion. The message that even a kid can do great things is interjected throughout the movie, but is quickly glossed over with some sort of comic relief.

Ministry Application
Due to the low quality and inappropriateness for the audience it was intended for, I can find no value in using this movie as an explicit ministry tool. The only benefit to ministry would be to have seen it and use it as a springboard for discussion with children who have seen it.

POSTS SIMILAR TO THIS ONE:
The Polar Express Movie Review
Movie Review: Strawinsky and the Mysterious House
Heaven is For Real Movie Review