Harry Potter and the Prisoner of Azkaban Movie Review

The much-anticipated movie adaptation of the thrid volume of the Harry Potter series has hit theaters. Prisoner of Azkaban is definitely darker than its predecessors and it strays from the kind of adherence to the book that we have come to expect from the Harry Potter movies. It was still enjoyable and leaves you hoping for better when the next Harry Potter movie comes around. 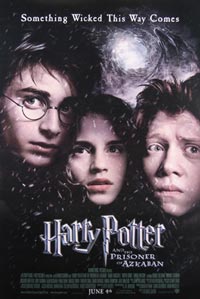 Life as an adolescent can be rough, especially if you have to live it knowing that your parents had been murdered when you were only a baby. Luckily, for Harry Potter, he is not your normal thirteen-year-old; he is entering his third year at Hogwarts School of Witchcraft and Wizardry. The much-anticipated movie adaptation of the third volume of the Harry Potter series has hit theaters. If the previous Harry Potter movies are any indication, The Prisoner of Azkaban will attract millions of movie goers, both young and old, topping this weekend’s box office charts.

The Prisoner of Azkaban is definitely a darker movie than the first two. This is owing to a new director as well as the subject matter of the movie. Upon returning to school, Harry learns that the person responsible for his parents’ death, Sirius Black, has escaped from the famed wizards’ Azkaban prison and is coming after Harry. In order to recapture Black, Dementors are dispatched to the grounds surrounding Hogwarts. Dementors are evil, wraith-like creatures who live by sucking the happiness and joy from people and leaving them with fear and despair. When in their presence, Harry is forced to relive the death of his parents by hearing his mother’s screams causing him to black out. One such time causes Harry to fall off his broom in the middle of a Quidditch match from hundreds of feet in the air. As the movie unfolds, Harry, Ron, and Hermione encounter hippogriffs, werewolves, and a special map that reveals the many hidden secrets in and around Hogwarts. Along the way, our three heroes learn that things aren’t always what they seem and a person’s true nature lies much deeper than what can be seen with the human eye.

Being an avid fan of the Harry Potter books, I thoroughly enjoyed the first two movies, which were faithful to the books. I had expected the movie version of The Prisoner of Azkaban to follow suit; it did not. There were many things that were changed in the movie for the sake of flow and time. I think, though, that there were many aspects of the movie that would be incomprehensible to someone who was not familiar with the book. There were too many holes and unexplained “coincidences” throughout the movie. Even the climax (which I won’t divulge here) is left wanting because the viewer has not been given enough information to connect the needed dots to draw the conclusions needed to understand what is going on. Maybe my expectations were set too high, but I was left somewhat disappointed at the end of the movie. I can only hope that we don’t have to wait two years for the next movie and that the next movie does a better job of giving the viewers a more complete storyline.

Due to the extreme popularity of the Harry Potter books and the previous two movies, many children will want to see this movie. In my opinion, this movie should not be viewed by children younger than nine or ten years of age. There are a number of frightening and disturbing scenes including Dementors attempting to “suck” the soul out of Harry and Sirius and a character transforming into a werewolf and chasing people. Another area of concern is that the Hogwarts students begin learning about divination, the art of foretelling the future. Admittedly, the divination professor is shown to be comical and a fraud, but there is one instance where she seems to be in a trance while telling Harry a prediction in an odd voice. An added area to be aware of is that Harry and his friends are now thirteen years old and exhibit behaviors typical of hormonal teenagers such as disrespectful attitudes towards each other and adults.

On a positive note, there are a number of positive aspects to the movie. Harry continues to learn that even though he many not remember his parents, they were able to have an effect on the kind of person he is turning out to be through their influence on him as a baby. Also, we see Harry exhibiting some grace by sparing the life of the person who was responsible for his parents’ death. Another positive element that comes out in the movie is that it is important for someone to find out the truth before making a decision about a situation.

Here are some discussion points that can be brought up with children who see the movie: