Cody Banks 2 proves to be a fun movie that improves on its predecessor. 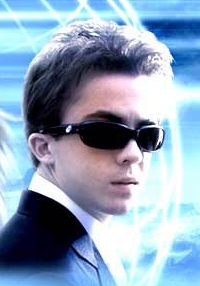 Enter the world of espionage, combat training and acne. Enter the world of Agent Cody Banks: Destination London (CB2). I thoroughly enjoyed this movie. It was definitely better than the first one. It had more gadgets, more action, and more humor.

While at Kamp Woody, a secret CIA training facility for kids, Cody Banks (Frankie Muniz) finds out that his former trainer, Victor Diaz (Keith Allen), is really a madman bent on controlling the minds of the leaders of the G7 countries. He takes on a mission to stop Diaz from completing his objective. In the course of the mission, Cody Banks travels to London and partners with Derek Bowman (Anthony Anderson), a CIA officer on probation. With the help of Derek and his fast driving sidekick, a surprise ally, and some really cool gadgets (including exploding Mentos, a self-playing clarinet, and a listening device disguised as an orthodontic retainer) Cody is able to save the world from chaos. All in a day’s work for this “average” 16-year-old (OK, maybe it was more like a week’s work).

Gladly missing from this movie was much of the subtle sexuality that was included in the first movie, Agent Cody Banks. Before you rush out and see this movie with your children, it does carry a PG rating, which means there are some things to take into consideration. CB2 has a lot more action scenes in it than the first movie. Although, there is no blood or bruises, the fighting scenes could be unsettling and overly suspenseful to sensitive children.

Another area of concern for sensitive children is a scene when Cody and Derek take a ride into a house of horrors. Nothing gory is shown, but there is a creepy soundtrack, which includes synthesized screams, in the background. Some other things to take into consideration are the possibility of children (especially boys) imitating the fight scenes with each other and some “potty humor” (like when Derek causes a distraction by bringing in three vials of “pee” into a laboratory and spilling it all over the reception desk).

The most unsettling aspect of the movie, though, is the fact that all of the kids at Kamp Woody are supposed to lie to their parents about the true nature of the camp and that they are CIA operatives in training. Yes, the subject is treated humorously as the camp prepares for a “Code 42” (Parents’ Day) and how Cody’s mom takes his nail clipper away from him because of her concern that he shouldn’t be carrying a weapon. Even though the lying is justified by the need to protect national security, it is still disturbing that parents, whom children are supposed to confide in, are left in the dark about the dangerous work their children are involved in.

Now for the positive aspects of the movie... Cody is shown as a dedicated CIA operative willing to do whatever it takes to make the world a secure place. He is self-sacrificing and takes his job seriously. In spite of his younger brother’s demeaning remarks and actions, Cody treats his brother with kindness and generosity. Lastly, throughout the movie there is the prevailing theme that it takes a team of people who trust each other to get a job accomplished.

Here are some possible discussion points: