A review of Wreck-It Ralph, including description of the movie, areas of concern, teachable themes, discussion questions, and scriptures to use. 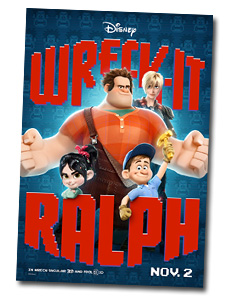 We’ve all been there. We work so hard at our jobs only to have someone else get all of the recognition. So it is with Wreck-It Ralph. Every day for thirty years the 9 feet- tall and 634 lbs .Ralph has torn down buildings being the baddie in the Fix-It Felix Jr. game so that Felix can come along with his golden hammer and magically rebuild to the accolades of the Nicelanders. Felix gets medals and parties in a high-rise. Ralph? He lives at the dump alone with no friends.

Wreck-It Ralph wants to change. So much so that he goes to Bad-Anon support group meetings on his off hours attended by the likes of the Pac-Man ghost, among other video game ghouls, who seem to have made peace with being bad. That is the problem. Ralph doesn’t want to be bad anymore. He wants to change. He wants to be liked. It is this desire that leads him to do something that no video game character should ever do… go turbo and jump into another game.

First Ralph jumps into Hero’s Duty where he cuts corners and earns a hero medal, then Ralph jumps into into a Candyland-like racing game called Sugar Rush where he befriends Vanellope von Schweetz aka “Glitch” because from time to time her character glitches and fuzzes up and havoc ensues. Much like Wreck-It Ralph, Vanellope is ostracized because of her glitches and lives a very lonely life full of ridicule. She wants to change, too. In the end she and Ralph team up to fight against evil, gain self-respect and eventually the recognition they both deserve.

At the Bad-Anon meeting there is a character that looks like Satan and is called Satan, but he corrects everyone and says his name is “Sateen.” There are other zombies, etc. in the Bad-Anon meeting, but none of them have any spiritual attributes…they are simply video game baddies. At one point Ralph goes to a bartender for advice…but it clear Ralph is drinking root beer. One of the Nicelanders pours himself a cocktail. Another character, Calhoun, is seen in a flashback drinking wine. There are several instances of “potty” humor.

There is violence, but it is more along the video game lines. Cy-bugs are shot. Faces are slapped in a slapstick way. There is some name calling and potty humor. There is violence in the form of video game violence. The Hero’s Duty game is army/mercenary time game where a lot of shooting primarily of insect-like aliens goes on.

God Makes You a New Creation Do Not Judge Others Trust God, Not Our Own Instincts You are Not Alone. Work Together to Find Solutions

I liked this movie a lot. It was fun to see old arcade friends like Q-bert. It was interesting to understand the inner workings of arcades after hours!

One point that is hammered home is that of redemption and change. We do not have to stay in the rut we are in, through God’s power we can be released and be a changed person. I don’t know about you, but there always seems to be at least one child in my ministry that might be labeled the “bad kid,” although I do not allow those labels to be expressed. The fact is that we are all sinners and we all do wrong things from time to time. Praise God we don’t have to stay in those ruts and can rise above and change through the power of Christ.