A review of Kit Kittredge: An American Girl, including description of the movie, areas of concern, teachable themes, discussion questions, and scriptures to use. 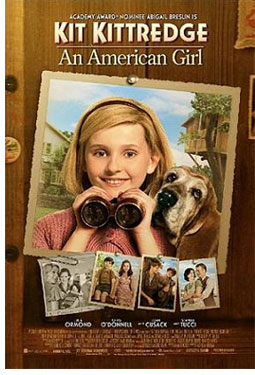 Kit Kittredge (Abigail Breslin) has a charmed life. She has great parents, a beautiful home, wonderful friends, a tree house where her secret club meets, a formerly-abandoned basset hound, and a typewriter - a necessary item for a Girl Reporter. The movie is set in Cincinnati at the dawn of the Great Depression. Kit's life gets turned upside-down when her father's car dealership goes under and the bank forecloses. Her father (Chris O'Donnell) decides to go to Chicago to try to find work, and her mother (Julia Ormond) agrees to take in boarders in an attempt to keep their house out of foreclosure.

The boarders are a wonderful assortment of people. There is a mother and her son, abandoned by the boy's father, who lost their home to the bank. There is also a dance instructor, a magician, a mobile librarian and eventually a monkey. Two hobos round out the menagerie. There is a lot of local talk about a series of muggings and robberies and everyone is pointing their fingers at the hobos. When these robberies hit home, Kit's bravery, loyalty and crime-solving skills are put to the test.

For the uninitiated, Kit Kittredge is an American Girl. Technically, I guess you could say she is a $90 doll, but for American Girl fans, she is real. There are nine historic American Girl dolls (some of these have friend dolls) each from different time periods. Each doll, er, girl, has a set of books that totally immerse the reader in the respective time period. These books all have morals and lessons to learn. American Girl has sold over 14 million dolls... and over 123 million books about them. You can also buy clothes, accessories, furniture, and much, much more. For girls, the catalogs themselves can be intoxicating!!!

True to the books, the movie-goer is immersed in the 1930's. You can't help but relate what is happening now in our present economic situation to some of the situations in this movie. In an interview with The Canadian Press, Director Patricia Rozema said, "I simply loved the values the script was giving kids. Kit's a journalist, she's fighting for social justice, she's learning not to feel shame for having to wear dresses made out of feed sacks - all that felt like it could be contemporary, although I had no idea all these foreclosures were going to be happening in the U.S. when the movie came out, and that the film would actually end up being quite contemporary."

Kit Kittredge: An American Girl is a wonderful movie. They could have made it sappy sweet to where you would expect Daddy Warbucks to pop out with Annie singing "Tomorrow" right beside him, but this is a different movie. This is an intelligent, sincere movie that never goes for cheap laughs. It never condescends. The children are somewhat precocious, but they never disrespect adults. The cast possess a vast amount of talent and it shines through.

In light of all the things that take place in current children's movies, these seem like minor infractions, but may need some further discussion with your children:

There are no obvious Biblical references. In fact, the one thing that is missing in this period piece is a religious reference since it would have been so prevalent in that day in time to go to church and seek comfort in a house of worship or some form of religion. However, there are quite a few parallels that can be made, as noted in the "Teachable Themes" above.