Movie Review: Indiana Jones and the Kingdom of the Crystal Skull

A review of Indiana Jones and the Kingdom of the Crystal Skull including description of the movie, areas of concern, teachable themes, discussion questions, and scriptures to use. 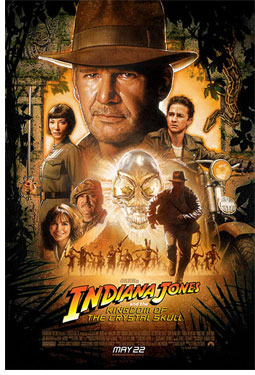 One of the greatest memories I had as a middle school student was getting the chicken pox. That's right staying home sick from school for 3 days! Not only getting to stay home from school but add to that my family had just bought -- for an outrageous amount of money -- this new technological wonder... the VCR! So I stayed home and watched Raiders of the Lost Ark about 19 times. A love affair began.

Noting this and the fact that my three favorite modern cinema characters are Indiana Jones, Han Solo, and Jack Ryan, you can understand why I was so anxious for the fourth installment of the Indiana Jones series to come out. After all, we have been waiting for almost two decades! So was I disappointed? With all that build-up, how can you not be disappointed? I placed Indiana Jones and the Kingdom of the Crystal Skull third in the series ahead of Temple of Doom but far behind The Last Crusade. It was still a very good movie from the "just having a fun time at the movies" standpoint.

Many kids will enjoy this movie, but many will have nightmares as well. Many parents who take their children to see Indiana Jones and the Kingdom of the Crystal Skull will wish they hadn't. The special effects, hair-raising adventure scenes, and the classic sarcastic Indiana Jones humor will please fans of this series.

This movie is not for younger kids. In fact many parents may be concerned to let children at any age see this film. We took our 11-year-old and as he said, "there were some really "creepy things" and it was "way scarier than Revenge of the Sith"."

The spiritual element in this movie was far from the Christian experience. Maybe the reasons so many liked Raiders of the Lost Ark and The Last Crusade was because the spiritual element in those movies was centered on the power of the one true God. Indiana Jones and the Kingdom of the Crystal Skull was closer to Temple of Doom in that its spiritual content was from a non-Christian source. Astral projection and auto-writing, considered to be satanic by many Christians, were both featured in this film. Powerful and all-knowing alien-like beings, who were worshiped by early South American tribes, were the source of power in this movie.

Another concern was the obvious pre-marital relationship between Indiana Jones and his love interest, Marion Ravenwood from Raiders of Lost Ark. The two have a grown son together which is news to Indiana Jones. This part of the storyline can easily be used as a teaching tool for kids by parents, stressing the importance of waiting until marriage, noting how Indiana missed seeing his only son grow up.