Movie Review: Horton Hears a Who

A review of Horton Hears a Who including description of the movie, areas of concern, teachable themes, discussion questions, and scriptures to use. 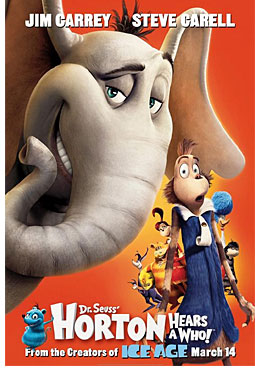 The most recent cinematic experience from the Dr. Seuss library is Horton Hears a Who. This movie takes you on a great adventure with vibrant and lively characters that the whole family can enjoy.

The movie starts out with Horton (an elephant) acting as a teacher for some of the younger residents of the jungle. Horton quickly shows himself as a carefree, imaginative mentor with a childlike innocence. The local busy bodied alarmist dictator who rules the jungle through fear, the Kangaroo Mom, does not appreciate these endearing characteristics. In Kangaroo's mind, Horton becomes completely intolerable when he discovers the speck that is home to Whoville. She demonstrates great hostility towards any belief that isn't grounded in tangible, scientific proof. Since she can't hear the microscopic Who people she immediately puts plans into action to eliminate the speck and drive Horton out of the jungle.

In Whoville, the Mayor is trying to make sense of this new realization that their world is only a speck and poised for catastrophe. The Mayor is in a power struggle with the city counsel and his own feelings of ineptitude, which are only enhanced by constantly being called a "boob" by the Chairman of the City Counsel. With the help of Horton, the Mayor eventually convinces the people of Whoville of the reality and frailty of their world.

Horton has discovered that his world is dramatically affecting Whoville in catastrophic ways. He commits to deliver the speck to a place of safety and tranquility where the Who people can live out their lives. To complete his mission Horton must traverse a rickety bridge that's unable to sustain the weight of a feather let alone a multi-ton elephant. Horton also has to battle the evil Vlad (a vulture) for possession of the speck ultimately losing out to Vlad who deposits the pink clover, which houses the speck, in a field of millions of pink clovers.

But Horton presses on searching through millions of pink clovers before finally becoming reacquainted with his new friends. On his way to deposit the clover in a high mountain cave Horton runs into the Kangaroo Mom who has rallied all the other jungle animals to imprison Horton and destroy the speck.

Horton Hears a Who is an authentic "G" rated children's movie. Compared to other children's movies that have been released in the past few years, Horton is an image of purity. But we are not comparing Horton to other movies and even though there aren't any modern profanities, there are some words and names that can be considered inappropriate, words like "boob" (not the female anatomy, the descriptive term for a foolish person) and "idiot" are mentioned on several occasions.

For younger children, a few scenes might appear to be too scary or intense. These scenes take place when the Kangaroo Mom and the Vulture (Vlad) conspire together to capture the "speck". There are a couple of surprise moments and a chase scene with Horton and Vlad that could be scary for very young children.

One of the more offensive scenes is much more subtle and will probably only be noticed by adults... the negative example that the Kangaroo demonstrates of "Pouch" (home) schooling. The mother Kangaroo is overbearing, over-sheltering, and over-controlling of both her child and the forest community. It's not until the end of the movie that the child Kangaroo is even able to escape his mothers pouch, against her wishes of course. On more than one occasion, the Kangaroo Mom demonstrates common negative stereotypes of home school families. The most blatant instance is when she states "and that's why we pouch school" in reference to Horton who helps to teach the other animal children.