Sky Captain and the World of Tomorrow Movie Review

The adventures of mercenary hero Sky Captain and on-again-off-again girlfriend/reporter Polly as they attempt to discover the person behind mysterious robot attacks. 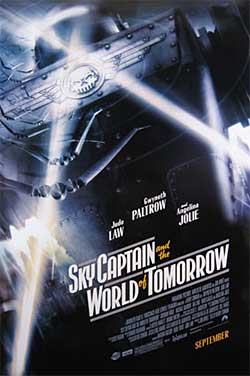 That's exactly the kind of nostalgia Sky Captain and the World of Tomorrow attempts to emulate. Billed as a family movie in the likes of Buck Rogers and Errol Flynn, Sky Captain wows audiences with its wonderful cinematography and star studded cast.

The Story
Set in the late 1930's, Sky Captain tells the story of mercenary hero Sky Captain (Jude Law) and on-again-off-again girlfriend/reporter Polly (Gwenyth Paltrow) as they attempt to discover the person behind a string of mysterious robot attacks. Cameo appearances by several recognizable faces (the most obvious being Angelina Jolie as a patch-wearing Commander in the British Air Force) contribute to the overall fun of the film.

Six famous scientists have disappeared and their only link is a mysterious project they worked on during World War I. Polly Perkins, reporter for the Chronicle, attempts to find out who is behind these disappearances when New York City is suddenly attacked by giant robots! Enter Sky Captain who, with his amazing plane and the help of genius Dex, thwart the robot attack.

Undaunted, the villain behind the attacks destroys Sky Captain's island base and kidnaps Dax, who has discovered the location of the evil hideout. With the help of Polly, Franky, and others, Sky Captain travels across the globe to find Dex and the missing scientists.

Family-Friendly?
Rated PG, Sky Captain pushes the envelope of being a "family-friendly" film. Language can be coarse at times (several uses of "God" in slang, and other 'minor' cuss words), as well as subject matter being on the adult side. Early in the movie the viewer is enlightened that Sky Captain and Polly have had a tumultuous relationship in the past that ended with the captain cheating on Polly and Polly sabotaging his plane.

Still another scene shows Polly waking from hypothermia to find herself naked with Sky Captain lying beside her (there is no nudity; we only know they are naked based on dialogue). There is a moment of innuendo dialogue before the camera pans to find a third person in the bed. While this is a humorous scene, this could cause a moment of uneasiness in parents. There are a couple of deaths (no blood) including a scene where a man is electrocuted to the point of becoming a skeleton. For younger children, this could be disturbing.

Discussion Points
There are several opportunities for great discussion between parents and children. Forgiveness and loyalty are prevalent themes throughout the movie. Sky Captain shows an unswerving devotion to his friends and is willing to stop at nothing to save them. Sky Captain and Polly struggle throughout the movie to forgive one another yet eventually they do reconcile. Without spoiling too much, the end of the film shows the "villain" asking for forgiveness in the form of a note.