A review of Epic, including description of the movie, areas of concern, teachable themes, discussion questions, and scriptures to use. 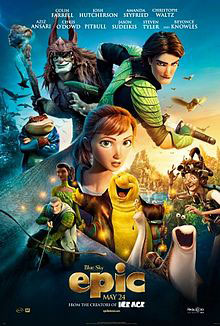 Mary Katherine (she prefers M.K.) is a teenage girl who returns to her father's home near the forest to live with him. Her mother has passed away, so she decides to give dad another chance to redeem himself, despite his professional and personal idiosyncrasies, both of which contributed to ending his marriage and causing the disenchantment his daughter. Yet when she arrives, it is clear he has not changed at all. He still romps about the house and the forest chasing imaginary little people using surveillance technology and completely ignoring his daughter. Enough. She quickly makes her exit from his world and an inadvertent entrance into the wondrous world of the Leafmen, plus their fellow miniature adversaries, the Boggans.

Now all she wants is to return to her normal size and to get home. Questions are: will she be able to get her father's attention, especially in light of his grief over her disappearance, and will he even be able to help her?

You will have to watch the film for yourself for the answers to these and so many other questions.

Epic is a grand tale in miniaturized scale. I should clarify. It is grand in terms of a few important themes threaded throughout its narrative. It is less than epic with respect to the scale (no pun regarding the size of the characters intended) of its overall presentation. By that I mean that the story never quite seems to figure out whether it is a comedy, a family drama, or a grand epic quest. Instead it came off as a mishmash of Honey I Shrunk the Kids meets Avatar meets any number of comedic animated features. Yet, looking past its conflicted identity, I managed to enjoy it. The voice talent is superb (meaning they sell the believability of the characters) and the animation and music track is competent. Although most of the characters are one dimensional (either purely good or completely evil), the writers do add greater dimension to Nod, M.K., and in the end, even her father

Epic is rated PG for frequent war violence which does not show blood and guts other than an evil Boggan splattering the windshield of a car.

There is also a brief but romantic kissing scene between M.K. and the young Leafman Nod.

A few scenes show Nod defying authority. Yet they also show him paying the consequences for his defiance. At one point, M.K. joins him in his defiance, which is not a surprise, given her earlier decision to run out on her father.

The film never explains how a teen could come to live with her father after the death of her mother, and then choose to leave quickly again without apparent consequences from him when she sees he has not changed.

Older kids should be okay. Younger children may become frightened at the scenes of peril and bored with the extended dialogue scenes.

Self Sacrifice We Are Not Alone Reconciliation Creation Care

The Leafmen stick together. Their queen places the people's interests above her own safety. They are all valiant and honorable, and their self-sacrifice impacts even a people (humans) and world much larger than their own. No small thing that infinitesimally tiny creatures should have hearts big enough to change the hearts of the mighty. For this reason I commend Epic to you. If we are willing to look past any short-comings in its storytelling execution and look deeper at the themes of reconciliation and belonging in our shared world, Epic just might let fly a Leafman's arrow which is sufficient to jolt our collective jaded cultural selfishness. It might even prompt us to let go of our hurt and become reconciled to others from whom we have become estranged in our lives. After all, "We may be individuals, but we are never alone" (General Ronin).