A review of Mr. Popper's Penguins, including description of the movie, areas of concern, teachable themes, discussion questions, and scriptures to use. 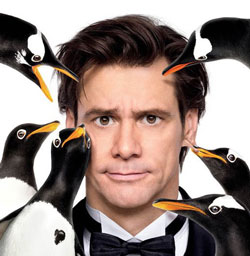 Mr. Popper (Jim Carrey) is a fast talking, quick thinking, wheeling and dealing salesman. The only thing standing between him and an illusive promotion with his name engraved as a partner with the firm is Mrs. Van Gundy (Angela Lansbury), owner of the only privately held land in a much coveted portion of New York City. The firm wants to buy her property, tear down her beloved dining establishment, and put up a pricey skyscraper.

Mr. Popper is game for the challenge even though Mrs. Van Gundy proves to be a formidable adversary. She is no pushover for his suave style, pointing out that he is a snake oil salesman.

Clearly, he has met his match. It doesn’t help that his deceased world traveling father bequeathed to him a wood crate which contains a stuffed penguin.

Oh. Wait. It is a live penguin which somehow had been sedated in a cold environment within the crate. But who am I to quibble with plausibility problems? Mr. Popper attempts to get rid of the penguin, but instead receives a second crate full of five additional penguins. And that’s not all! A few of the penguins turn out to be female and pregnant and soon lay their eggs.

Suddenly, Mr. Popper’s world and his priorities are thrown into chaos. His flat is turned into a winter wonderland in order to calm the penguins, and his kids (a pre-teen boy and a teen girl) want to begin spending time at his place. Even his ex-wife is warming up to him. Maybe it’s because something inside of him is warming up to them.

In the thick of this improbable adventure Mr. Popper loses interest in pursuing Mrs. Van Gundy’s property, and he loses his job as a result. Penguins have that affect on people, apparently. Until Mr. Popper’s heart is broken in an event I will not disclose here. The harshness of life sweeps away the fairytale feelings, leaving him embittered and causing the snake oil salesman veneer to drape back over his personality.

But all is not lost. In the end, Mr. Popper finds his way. You will have to watch the film to discover exactly how.

The film is rated PG for what the ratings board calls “mild rude humor and language.” To state it gently, a great deal is made of penguin droppings and their comedic possibilities.

Mr. Popper’s interactions and eventual love for the penguins remind him of his true priorities, his family and other people. They melt his veneer and help him to rediscover what is most important.

Mr. Popper started out as a manipulative salesman, eager to say whatever was necessary to get his way. Yet, his penguin interlopers taught him a thing or two about loyalty and trust. Although he nearly went back to his old ways, Mr. Popper clearly changed in the end, demonstrating his changed heart through a key decision.

This attribute was slow in coming to Mr. Popper. Yet it did come, and it helped him to begin repairing his damaged relationships with his family, especially his wife and his teen daughter. It even changed Mrs. Van Gundy’s opinion of him.

Mr. Popper’s Penguins provides a mixed bag of family fare, albeit one bereft of plausibility and full of unnecessary penguin droppings humor. If the producers could have convinced themselves to create a truly Rated G film, Mr. Popper’s Penguins would have received a slightly more enthusiastic endorsement from yours truly. Alas, it was not to be. It is too bad. It has some bright moments worth discussing with your children. A couple of poignant moments of profound pain, too, also worth exploring.

Yet, the film’s sophomoric humor provides an unsettling counterpoint to its underlying gravitas. As a result, it is hard to know what to make of Mr. Popper’s Penguins as a whole, other than to point out that it does seem to shine a glimmer of hope that it is possible to overcome a lifestyle of self-serving cynicism.