A review of The Karate Kid, including description of the movie, areas of concern, teachable themes, discussion questions, and scriptures to use. 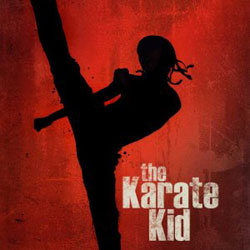 Life is tough for 12-year-old Dre Parker. The only way his mother can keep her job is to relocate from Detroit to Beijing, China! Upon his arrival to his new digs, a dump called The Beverly Hills Luxury Apartments, he befriends an American boy who invites him to the park. At the park he meets a young female violinist, Mei Ying. Their conversation incites the wrath of a thug, Cheng, who with his friends, give Dre a hefty kung fu beating for befriending the girl.

Things do not get better the next day. Cheng and his friends all go to the same school where he is bullied and mistreated. He tries to stay out of their way, but they continue to harass him.

Dre does not want to worry his mother with this, but has no where to turn until a maintenance man, Mr. Han, steps in to help him. Mr. Han just happens to be a kung fu master who believes that serenity is the key to mastering the martial arts. He trains Dre and prepares him for the kung fu tournament that will settle the score with Cheng once and for all.

I really enjoyed this movie. While it is the same basic story line as the original, there are distinct differences that set it apart. Dre is younger than the original character, Daniel LaRusso.

China being the backdrop was incredible.You were able to see the grittiness of the city and the beauty of the Forbidden City, the wonderful countryside and the amazing Great Wall. The kung fu fighting seemed just natural in this setting. Dre’s mother is a very positive influence. She shows caring concern and demands respect from him. It is obvious that she is in authority over him, which does not happen often in family entertainment.

Mr. Han is a patient teacher. He, too, commands respect as he imparts his great wisdom to Dre. One great lesson, “Life will knock us down but we will choose whether or not to get back up.”

Dre learns discipline, self-control and respect. His behavior clearly demonstrates that. This is also rare in family films!

Okay, this is a violent movie at times-all in the context of kung fu fighting - and mostly kid on kid. At times this was disturbing, but it was not gratuitous. Somehow, seeing the kung fu fighting with China as a backdrop was not as harsh as if we were seeing gang fighting on the streets of Detroit. The fighting is gritty, but choreographed. I don’t think that a child would assume from the movie that they could handle a situation that way...but some might try. One thing for sure, most every kid in the theater I was in was throwing imaginary punches throughout the entire movie. In the theater’s lobby there was a karate demonstration going on when the movie was over!

In the beginning of the movie Dre used an indelicate word, but Mr. Han immediately takes him to task for it. Half way through his training Dre gets frustrated and yells out the “D” word. It was so out of character and context one almost wonders if that was to secure a rating. God’s name is misused a couple of times. Dre ignores a text from his Mom to come home at one point.

I also need to mention a bizarre dance scene in the market place where Dre and Mei Ying dance to songs about poker and then pole dancing. If you are now saying, “What?” you are experiencing what I was when I watched it. Also, Dre and Mei Ying share a kiss. They didn’t have to throw that one in there either.

Running away from problems never helps anything.

Even the worst situations can turn around for good.

So often we give up when things get tough. Dre worked hard for a long time to achieve his goals.

In the end bullies will not win.

Dre should have confided in his mother, his teacher, his principal and Mr. Han about the bullying he faced.

We must always try to resolve conflict in a peaceful way first. If that doesn’t work, ask a grown-up for help.

Again, Mr. Han’s quote, “Life will knock us down but we will choose whether or not to get back up.”


Romans 5:2-4 “Because of our faith, Christ has brought us into this place of undeserved privilege where we now stand, and we confidently and joyfully look forward to sharing God’s glory. We can rejoice, too, when we run into problems and trials, for we know that they help us develop endurance. And endurance develops strength of character, and character strengthens our confident hope of salvation.” (NLT)


Romans 8:28 “And we know that God causes everything to work together for the good of those who love God and are called according to his purpose for them.” (NLT)


Deuteronomy 30:19-20: “Today I have given you the choice between life and death, between blessings and curses. Now I call on heaven and earth to witness the choice you make. Oh, that you would choose life, so that you and your descendants might live! 20 You can make this choice by loving the LORD your God, obeying him, and committing yourself firmly to him. This is the key to your life. And if you love and obey the LORD, you will live long in the land the LORD swore to give your ancestors Abraham, Isaac, and Jacob.” (NLT)


Deuteronomy 31: 6 “So be strong and courageous! Do not be afraid and do not panic before them. For the Lord your God will personally go ahead of you. He will neither fail you nor abandon you.” (NLT)

Okay, this is a martial arts movie based in China, so why is it not called The Kung Fu Kid? I guess they just wanted to tap into the 80’s essence. This is not just another remake, The Karate Kid can and does stand on its own.