An logical and necessary discussion for allowing men to serve in children's ministry. 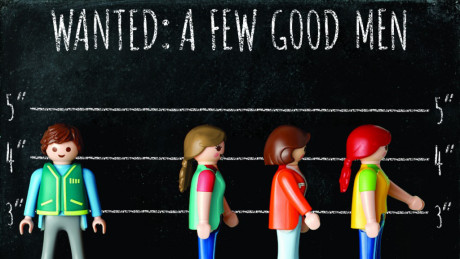 I have seen this trend at some churches lately. The reason, when you boil it down, is this: people fear that men working with children may secretly be pedophiles and that parents will be afraid to leave their children with a man in a classroom, especially in early childhood. News stories of late have only added fuel to this mania. In response, some churches have removed all men from their kids’ areas and even refuse to recruit men in kids’ ministry. I would laugh at this if it weren’t so very tragic.

The second church where I was on staff had this rule, and we were desperate for leaders in the kids’ area. To my horror, I found out the church did not even conduct background checks on the women who served because “women aren’t pedophiles.” Wrong! Women can be pedophiles, and the number of women sex offenders, though still far behind men, is rising. I demanded that all women in our kids’ areas undergo a background check, and I received heavy sighs and eye rolling. One administrative assistant finally said, “What for? They are women!” We all were unprepared, however, when the checks revealed that two women applicants for key teachers in the preschool area had felony convictions for child molestation. One had even lost custody of her own children. We never would have known that if we hadn’t checked.

I changed the whole way we recruited and thought about our kids’ ministry that day. Everyone underwent a background check. And I opened the door for men to serve in the kids’ ministry again. Some men were hesitant to sign up, however, because they didn’t want to be viewed as a potential child molester. Do we understand how biblically far off we are when we do this? Where does this thinking come from? Actually, the way we think of kids’ ministry as a whole isn’t biblical at all. In Deuteronomy, God commands the whole congregation, especially the men, who ruled that patriarchal society to make absolutely certain that the next generation knows all about God and His Word.

Nowhere in the entire Bible is the spiritual
formation of children written off as “women’s work.”

Spiritual training was the job of the father and mother of the home and ultimately of the entire congregation. In fact, Jewish boys by the age of five were instructed by skilled teachers of the law—all men. Part of what happened in our early American culture is that children were viewed as inferior and unimportant, and carted off to another room to be “babysat” while the important adults had church. That posed a problem: who is the least important person we can spare to go babysit while we have church? Usually it was the young unmarried girls. The Bible tells us clearly in both testaments that God cares dearly about the next generation. He directly holds His congregation responsible for these young ones, to make sure that they know HIM and His Word. He doesn’t take it lightly when this teaching hurts His kids (think “millstones,” see Matthew18:6).

The church should never allow cultural pressure or the latest headlines to scare us into operating any ministry in an unbiblical manner.

Right now, more than 53 percent of the kids in my congregation are in single-parents homes. Many of these homes are run by a single mom. So many kids have no father figure at all. Almost all of their public school teachers are women also. Many kids are desperate for a strong male role model to show them how a man of God acts. Not a perfect guy, just a man who loves Jesus!

So what happened when we started recruiting men and allowing them to serve in kids’ ministry? Panic and mayhem? Not at
all. Amazingness is what happened. We gained some of the best leaders I have ever known—strong men of God who have prayed for, been there for, and lovingly taught these kids. Right now almost 61 percent of my kids’ ministry volunteer force are men, and I haven’t had any parent complaints. We were ready to address any concerns, but we decided to completely get behind our volunteers and unashamedly begin promoting this more biblical view of kids’ ministry. We put all of our leaders in the classroom because they are well screened, and we believe in their ability to serve our kids and church well.

I thank God for all of our volunteers—men, women, teenagers, grandparents. We know that reaching our kids for Jesus is the job of the congregation, not just a few women between the ages of eighteen and fifty. Even though my husband and I have a great marriage, I am so grateful for the Christian men who have taken the time to set an example for my son and for my daughter. It was one of these dedicated teachers, a grandfather, who led my son to Christ one Wednesday night—and it brings tears to my eyes even as I write this. If you’re having trouble getting enough people serving in kids’ ministry, for heaven’s sake, and the kids’ sake, don’t tie either of your hands behind your back.