A review of Despicable Me 2, including description of the movie, areas of concern, teachable themes, discussion questions, and scriptures to use. 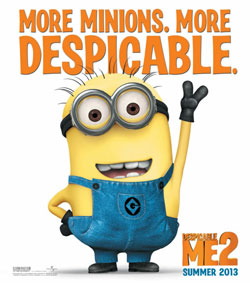 When the world needed a hero, they called a villain (from one of the theatrical posters). Enter the former arch-villain Gru: "I'm back in the game!"

Let's face it. As adorable as it is to see Gru struggle to be an attentive daddy to three young girls (Margo, Agnes & Edith) and as ironically funny as it is to see him attempt to redeem his professional calling into a respectable jam maker, it just doesn't make for entertaining theater for very long without the temptation to unleash his inner villainy once again. Besides, the minions and Gru all agree that the jam tastes horrible.

And so he's back in the game, responding to the AVL's (Anti-Villain League) request to help them nab a new villain who has pulled off a nefarious scheme designed to usurp Gru's former claim as the greatest villain of all time.

Balancing his tender care for the girls on one hand, with his devious ability to concoct schemes to expose and foil the new villain on the other, Gru has his hands full. That would be bad enough. But there is a lady (Lucy, the cute AVL agent who lipstick tazored him and then dragged him to her headquarters, later being assigned to him as his partner) now in the mix, and her charms have not gone unnoticed by Gru, or his daughters, especially the youngest who so very much wants a mommy.

The plot thickens and the game is afoot. But this is about Gru, not Sherlock, as even Watson no doubt would point out. As the story unfolds, danger lurks for the minions, the girls, and for Gru. Interestingly, Gru seems to retain aspects of his former villainous character, showing little concern when most of his minions inexplicably disappear, except to express annoyance at the inconvenience to himself. So he lacks empathy on one hand for the minions or innocent bystanders in various scenes, but admirably displays it in spades on behalf of his daughters on the other. Not to mention his growing fondness for Lucy. But you will have to watch the film yourself to see how that works out.

Despicable Me 2 is rated PG for rude humor and mild action. On numerous occasions the humor is more rude than it is funny, resorting to jokes about flatulence and insulting comments about the appearance (baldness, weight, etc) of various characters.

The action shows violence with no real sense that anyone is going to be seriously hurt. These occur as a mixture of pratfalls and comic attacks between adversaries. However, younger children will be hard-pressed to understand the difference between animated violence and reality.

Gru's oldest daughter, Margo, develops a serious crush on a boy who at first woos her and then dumps her.

Gru shows little regard for his minions, despite his supposedly reformed character, although he does rescue them and the world from their mayhem in the end.

Older kids should be okay. Younger children may become frightened when the minions are transformed into vicious, heartless creatures of destruction.

Despicable Me 2 is an odd mix of cheap laughs which do not quite measure up to that of their predecessor, and subtle complex characterization, showing that you may be able to take the villain out of a life of crime, but it takes far more to uproot his former nature out of him completely. Consequently, I left the theatre feeling encouraged by Gru's respectful, tender, and even courageous (it takes courage to dress up as a fairy princess for his youngest girl's birthday party when the hired act refuses to show up!) growth as a father. But I also sensed an underlying potential for him to resort to his nefarious ways once again, given his unresolved anger issues and lack of concern toward his minions and people not close to him.

In a way, I saw a hint of myself in him, capable of self-deprecating tender care, and ruthless disregard for those who anger him. It's that second part that concerns me...for his sake and mine. How about you?