Movie Review: Aliens in the Attic

A review of Aliens in the Attic, including description of the movie, areas of concern, teachable themes, discussion questions, and scriptures to use. 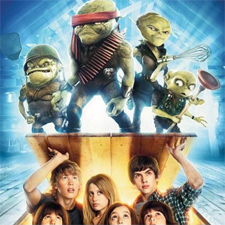 Family vacations are the stuff of legends, aren’t they? Sometimes they are more remembered for what went wrong. The Pearson family has a whopper of a story to tell. Their vacation home ended up with Aliens in the Attic...which is probably more memorable than the week of fishing that they had planned!

Tom Pearson is a former Math-lete; former, because he is tired of being labeled a geek. As he tells his father, “I don’t want to be like you. I want to be cool.”

Besides his parents, he is on this vacation with his older sister, younger sister, uncle, three cousins and Nana Rose, his grandmother. His sister’s obnoxious boyfriend show, too. No sooner do they arrive to their rental home when noises are heard in the rafters above. You guessed it! Aliens in the Attic-from planet Zirconia! Now you would think that the kids might mention this to their parents, but no, they had to fight the aliens on their own. I mean, all the aliens wanted was world domination, so why bother anyone with that?

The aliens have a secret weapon. A dart shot into the neck of an adult rendered said adult into kind of a zombie-puppet able to be controlled with a game-like controller. This came with really comical results.

Every kid in this movie lies. This is a recurrent theme. Tom lies about his grades, hacks into the school computer and changes them. Tom’s sister lies about her curfew, her boyfriend and everything else. His little sister lies about....well, it just keeps going on.

There is a lot of innuendo between Tom’s sister and her boyfriend. You are left with the impression that a lot more is going on and it is not just an innocent relationship. At one point he rips off his shirt and she gets all hot and bothered.

The aliens view a few moments from The Mask of Zorro- a kissing scene. The aliens are confused by the “lip hugging.”

There is an awful lot of slapstick kind of violence. Amazingly, no one gets hurt with all of the slapping, kicking, falling off of balconies, etc. The aliens have weapons, and the kids are armed with stuff like potato guns and rakes. The weapons are not used sparingly, but again, no one gets hurt.

God’s name is misused a number of times. There is quite a bit of name-calling. We learn that the alien word, geck, is the worst word you can use.

All of this bad stuff is happening around these children, but they never tell an adult. They call the police at one point, but lie to him when he arrives. For some reason the kids feel better about solving the problem themselves.

In the end, the kids defeat the aliens, Tom realizes that it is okay to be smart, and everyone looks forward to calming down and going fishing. Whew!


Children should be encouraged to talk to their parents and tell them what is going on.


Tom is almost ashamed of being smart, because he is teased and ridiculed for it. Using his abilities saves the day in this film.


One of the aliens, Spark (aka Mr. Snugglelumps) is not bad. He actually works with the kids to defeat the bad aliens and send the invading ships away.


Lying, in the end, does not help anyone, anytime. It is not good to lie.


Colossians 3:20 “Children, always obey your parents, for this pleases the Lord.” (NLT)


Proverbs 17:20 “The crooked heart will not prosper; the lying tongue tumbles into trouble.” (NLT)
Proverbs 19:5 “A false witness will not go unpunished, nor will a liar escape.” (NLT)


Proverbs 19:20 "Get all the advice and instruction you can, so you will be wise the rest of your life." (NLT)

This was not a bad film. It was cute. I think it would have done better as a Friday night Disney or Nickelodeon movie, or maybe it should have gone straight to DVD. It was entertaining and fun. There were tons of unanswered questions, but none life shattering. I definitely would not recommend this movie for young kids. In the end, I will leave you with one last caution. These Zirconians did not complete their mission, and this was not their first try. If you suddenly hear sounds in your attic, be very careful!