A review of The Incredible Hulk, including description of the movie, areas of concern, teachable themes, discussion questions, and scriptures to use. 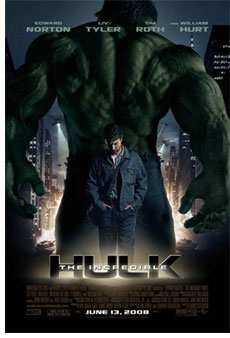 Was this The Incredible Hulk or was it not? If there were ever an extreme makeover, this 2008 version of the movie qualifies as such – not only a new cast, but also a completely different spin on the Hulk that we have known in years past (as in 2003's film, Hulk). There are also several nostalgic references to older versions of the Hulk. Movie makers even include a brief appearance by Lou Ferrigno. But this definitely felt like a completely different movie, not just a sequel.

Bruce Banner, a brilliant scientist, who participated in an experiment gone bad, is seen in Brazil attempting through the use of science, breathing exercises/Yoga techniques, constant heart rate monitoring, and communication with Mr. Blue – a scientist whom he hopes will help him, to find a cure for the effects of gamma radiation on his system. This experiment causes him to transform into something completely unstoppable when he becomes angry.

The Incredible Hulk opens with Bruce stating "I've been alone for a long time, not because I want to be, but because until I solve this problem I have to be," and we are introduced to a guy who is simply trying to find an antidote for his problem and so far so good. 158 days without an episode is not bad.

Unfortunately the military catches up to him and tries to capture him for evil purposes rather than for good. General Ross has this secret desire to use power for evil and will stop at nothing to accomplish his mission. All throughout the movie, with each action packed scene, I could not help but notice that though it was obvious that The Incredible Hulk was a bullet repelling machine, still the military insisted on bringing out their best artillery as bullets constantly bounced off of this big green thing. How long does it take to quit trying to destroy what is indestructible? General Ross and his army begin a pursuit of this unstoppable force that results in even more evil and destruction.

Ultimately, Banner has a face-to-face encounter with Mr. Blue who attempts to cure him, with no promises of a cure, but a hope that the problem would at the very least be suppressed.

Scientist Samuel Sterns, aka Mr. Blue's experiment is a success until General Ross' experiment on Emil Blonsky begins to wreak havoc in a display of evil power that seems to never end. It is then that Banner attempts becoming "Incredible" once again in order to participate in this final battle – a battle that is quite lengthy. Of course The Incredible Hulk triumphs over this "abomination" and brings things to an end – so we think.

There was no surprise that this movie was filled with a ton of violence, and in my opinion way too much for young children. There was also an intimate scene between Betty Ross and Bruce Banner that was clearly leading to sex. Of course they never actually do anything because of what it would trigger in Banner. They were fully clothed, but still kids know what's going on and this was confirmed by some of the giggles, etc. heard from kids who were present in the movie theater.

The Incredible Hulk is filled with many teachable themes and I certainly cannot mention them all, but here are a few based on quotes within the movie as well as overarching concepts/scenes: