A review of Prince Caspian including description of the movie, areas of concern, teachable themes, discussion questions, and scriptures to use. 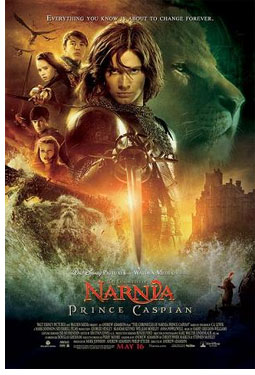 If The Lion, The Witch, and The Wardrobe was a nice civilized children's story, Prince Caspian is a contrasting savage story that is anything but nice and fluffy.

Prince Caspian takes place one year after the Pevensie family leaves Narnia and returns to war torn England. They are now living in the city, found longing for their days in Narnia, and at the same time beginning to feel "comfortable" in their native world. Meanwhile in Narnia, 1300 years has passed and man now rules the land that was once vibrant and alive, the Narnians have been hunted to extinction -- all but those who have retreated and are secretly living in the deep woods.

Prince Caspian, the heir to the Talmarine throne, becomes a tragedy of court politics and finds himself fleeing for his life in the deep woods where he comes face-to-face with the mythical Narnians. Now exiled, Caspian joins the Narnian forces in their efforts to reinstate him as King and bring peace and freedom to the land.

For 1300 years Aslan has been missing from the land, will he come once again to save Narnia? Will the Pevensie children be able to live up to their reputation as Kings and Queens of Narnia? Will the Narnian Army be able to overcome the armor-clad regimented army of the Talmarine?

The moviemakers went to great lengths to keep the film PG so that families could bring their children, and at the same time, they kept enough suspense and intensity to tell a really good story.

The only real objectionable material will be the amount of violence and the intensity of some of the scenes. There is little blood and the film is virtually absent of gore. Most scenes where gore or blood would be present are more subtle than obvious. The movie does a great job in leading and hinting at things that don't actually happen on screen. In one scene, you are lead to believe that Peter decapitates a man. You don't see it but you see enough of the beginning of the scene and a slight hint at the end to realize what happened. For the young child this event will probably go unrecognized.