A review of Iron Man including description of the movie, areas of concern, teachable themes, discussion questions, and scriptures to use. 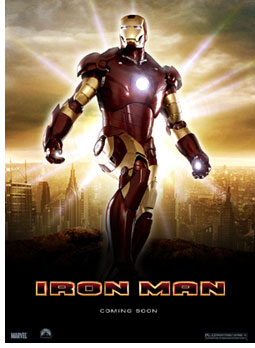 "I am Iron Ma-a-a-an!" (to be said out loud in a metallic sounding voice). Based on the comic book character of the same name, the film Iron Man centers on the life of weapons mogul Tony Stark and his journey of redemption from wild and uncaring playboy to unlikely hero.

Wild parties, fast cars and a new woman every night... oh, and a company built upon weapons. Tony Stark has created for himself a life that, on the surface, is what many people strive for. That is, until he receives a reality check in a most severe manner. While demonstrating a new weapons system for the military, Stark's convoy is attacked by a group of terrorists. Stark is held captive for the purpose of building the very weapon he demonstrated only hours before. Captive with him is another scientist who helps Tony explore the legacy he had been leaving behind. With the realization that he has led an empty life, Stark sets about escaping his captors to begin his new purpose in life, that of the armored hero Iron Man.

From a pure entertainment viewpoint, this was quite the movie. Not only did this self-described comic book nerd enjoy it, but my wife (whom I dragged with me) actually wants to see it again! Amazing special effects, superb casting, and a solid story help create one of the best superhero films of all time.

Much in the vein of Transformers, moviegoers were entertained but just enough was inserted into this movie to make parents squirm. My wife and I were both bothered by the number of kids that were in the theater. There's simply too much violence and other adult subject matter to make this movie kid-friendly.

In an effort to fully contrast the life before and after Tony's harrowing experience, we see several scenes with drinking and partying. We also see Tony experience empty relationship upon empty relationship, including one scene, while not graphic, depicting his latest conquest. We witness several people being killed, and though not bloody, there are quite a few deaths.