A review of Enchanted including description of the movie, areas of concern, teachable themes, discussion questions, and scriptures to use. 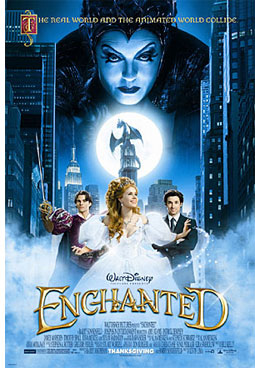 The latest fairytale movie from Disney opens in the world of animation where we meet Giselle singing in the forest. Not far away from Giselle is Prince Edward, who is singing the same song and finds his way to Giselle, and what was two solos is now a duet. At the conclusion of the duet, Prince Edward decides that they must get married the very next day. It's the true fairytale story. Giselle is preparing for the wedding with the usual host of forest animals, lead by a very vocal squirrel named Pip. On her way to the wedding ceremony Giselle comes in contact with an old haggardly woman. The haggardly woman who is the evil Queen Narcissa in disguise pushes Giselle down a well. Giselle ends up coming out of a manhole in the middle of New York City -- leaving the animated world behind -- and is now a real live girl.

New York ends up being dramatically different from her fairytale land of Andalasia. Giselle quickly discovers that New York City is the complete opposite of her homeland. She wanders the streets asking people for directions to the castle only to be ignored and rebuffed until her crown is stolen by a homeless person.

We're introduced Robert (Patrick Dempsey), a divorce attorney, Giselle's true love, while he's in the middle of a hostile meeting between a divorcing couple. Robert is interrupted by a phone call from his six-year-old daughter, Morgan. Later Robert and Morgan are about to get into a cab when they see Giselle on top of a large billboard trying to get into the picture of the castle advertising the Palace Casino. Morgan believes Giselle is a princess and Robert thinks she's crazy. Won over by the prodding of his daughter, Robert brings Giselle home with them until he can find a place for her to go. Before he can get her a cab and whisk her away, Giselle falls asleep and ends up spending the night.

In the morning Giselle uses her fairytale princess powers and a little help from some rats, pigeons, and cockroaches manages to clean Robert and Morgan's apartment before they wake up. She also manages to make her own clothes from the curtains in the bedroom. Later in the day, Morgan and Giselle go walking through the city where they have a debate about the truthfulness of true love and if Prince Edward will really be there to rescue Giselle. Giselle helps Robert woo back his girlfriend, Nancy, who he has invited to a Royal Ball masquerade party. After some singing and dancing, we can see that Giselle and Robert are beginning to fall in love even though neither of them is willing to admit or acknowledge it.

All the while Giselle is learning all about real life and how it both contrasts her beliefs and at the same time brings realness to her life. After some searching Prince Edward finally catches up with Giselle and Robert and intends to take Giselle back to Andalasia. However, no longer convinced that Robert is her true love, she insists that they go on a date. On their date, Giselle realizes that she is in love with Robert and not Edward. Knowing that Robert is at a ball with his Nancy, Gisele convinces Edward to attend the ball with her before they return to Andalasia.

Realizing Nathan's ineptitude has prevented him from keeping Giselle and Edward apart, Queen Narcissa has entered the real world in hopes to keep Giselle and Edward from taking the crown from her. Narcissa catches up with Giselle at the ball and entices her with a poisoned apple, which Giselle eats, casting her into a deep sleep. Using the logic of fairytales Edward and Robert realize that only with the kiss from her true love will awaken Giselle. Edward tries first but is surprised to learn that he is not her true love. Robert goes next and is successful.

Nathan tells everyone that Queen Narcissa is behind all the troubles, forcing her to show her true colors, which happen to be a blue dragon. Having turned herself in to a dragon, she whisks Robert to the top of the Empire State building. Giselle follows and together they vanquish Narcissa. Meanwhile Edward and Nancy discover an affection towards one another in the midst of a fairytale moment.


For the most part, the movie is clean and innocent, much like the traditional animated Disney fairy tales. I think there is one "*itch" word used, I didn't catch it but my daughter did, or it was the *utt word. All I remember is her saying that Narcissa used the "b word".