A review of Ratatouille including a description of the movie, areas of concern, teachable themes, discussion questions, and scriptures to use. 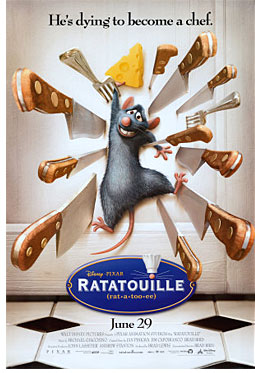 Remy (voiced by Patton Oswalt) is a rat who has a discriminating palate, along with an unstoppable urge to be a chef. He is inspired by a cookbook, Anyone Can Cook, written by a late five-star chef, Auguste Gusteau. Gusteau would probably give Emeril on the Food Network a run for his money today.

When Remy and his whole rat-clan must depart their country home quickly, Remy is separated from the other rats. By chance, he finds his way through the sewers of Paris, and winds up in the holy of holies: Chef Gusteau's restaurant kitchen, now run by his none-too-ethical sous chef, Chef Skinner (voiced by Ian Holm).

Remy teams up with young Linguini (voice of Lou Romano) -- the garbage-boy, pot-washer and general help -- who is desperately ill-equipped and just as desperate to keep his job. While Remy can understand Linguini and human speech in general, Linguini cannot understand Remy. But with practice, they work a system out where Remy is responsible for the cooking and Linguini, can as he said, "be responsible for looking human." Remy sits on Linguini's head and pulls at his hair to direct Linguini's hands and arms. Remy is the chef; Linguini is his means.

Can they meet the high standards of the infamous restaurant critic, Anton Ego (voiced by Peter O'Toole)? Well, of course... this is a movie with a happy ending. But how they meet those standards, with the aid of Remy's family, is where the fun of it lies. In the end, nothing will keep this rat down or keep him from accomplishing what he has set out to do and become.

In this overview, I would not do it justice if I missed out on at least mentioning that the computer animation was vibrantly three-dimensional. Paris looks romantically appealing here. The film is hyper-realistic about physical textures -- you can almost feel Remy's velvety ears – and is exuberantly cartoonish about motion physics. My mother in-law had commented that the animators had done such a fantastic job of the animation that it appeared movie-like most of the time.

Ratatouille is Pixar's way of making movies, in my opinion, by taking the time to create something outstanding, not chasing after shortcuts, and making the rest of the animation industry look like stick-figure factories.

I have searched for concerns and the few that I have come up with are weak at best. But here they are: the time of the whole movie could be a little lengthy for the very young. Also, at first it could appear glamorous and OK to misguide people in the truth. But as the movie went on, you watch an internal struggle for bearing the truth that Linguini deals with until he comes out with the truth. The word "hell" is uttered once in the film, in the context of Chef Skinner welcoming a newbie Linguini to his kitchen: "Welcome to Hell!"