Happy Feet is a lighthearted, fun CGI musical that drops a heavy political bomb toward the end, but manages to recover. It isn't free of adult innuendos and even some anti-Christian hints, but overall is an entertaining film. 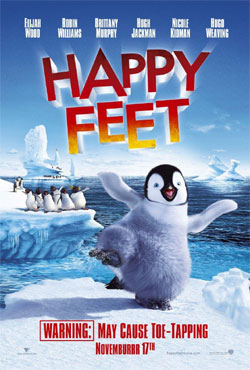 Happy Feet is a movie filled with toe-tappin' music and eye-poppin dancin' that made even this writer want to learn to dance! (before my Baptist roots got a hold of me!)

The CGI is amazing and easily blurs the lines between animation and photography. The story is one of finding acceptance and love with a HEAVY environmental message that is so harsh it nearly ruins the film which barely manages to recover the light fun spirit that runs through most of the film. The weight of the environmental agenda comes dangerously close to drowning the fun in gloom and doom, so you leave wondering if you are supposed to be encouraged or depressed. When I have the DVD I'll enjoy skipping the 'guilt chapters.'

Aside from the expected sexual innuendos and cheap shots at Christians (most of which children likely will miss) and some questionable song lyrics that may make parents cringe, there are some redeemable themes in this fun movie.


Being Different is OK

Every child feels "different." No one is "normal." We all have things about us that we wish were different. Children are much more sensitive to the things that make them unique and what may be obviously a talent or special feature to them can feel like a curse, especially when other children tease them or point out that they are different. Showing the scene of his birth and rejection can be a good opener to a discussion/lesson on how God makes each of us different.


Everyone Has a Purpose

Jeremiah 29:11 talks of God having a plan for our lives, and a good one at that! Mumble, nicknamed 'Happy Feet' for his tap-dancing talent, is ostracized from the group for being different, but in the end his unique talent ends up bringing salvation to the group. Kids need encouragement that there is a purpose for everything in their lives, even the hard things.


Good Friends Stick By You

Mumble's childhood friend sticks by him even when others ridicule him. Also, his new friends the Adelie Amigos stick by him all the way to the end.


Help Others, Even If They Don't Deserve It.

Despite the teasing and even downright rejection, Mumble still goes out of his way (literally) to help those who were mean to him. A great example to children to love your enemies and bless those who persecute you.


Encouragement Makes All the Difference

The scene I loved the most was when Mumble left his friends after being rejected and meets his new "amigos" whose words of encouragement visually change Mumble's heart. As they compliment him you can see his whole attitude toward himself changing. They think his tap-dancing is awesome, something he has never heard before. It would be a great clip on the power of encouraging words.


Do What is Right, Even Against Authority if Necessary

Sometimes those who are supposed to be our leaders and examples can be wrong. In this movie, the elders were wrong in both their treatment of Mumble and in their belief in what caused the shortage of food. Mumble had to respectfully take a stand against them, and even his friend Gloria stood up for him.

I suppose it would be bad to ignore the heavy handed purpose of the film, taking care of our environment. While I am not very informed (even after this film) on how serious arctic fishing is effecting wildlife in those areas, it is true that we should be responsible with our earth as a gift from God. It is also true that the decisions we make, especially wasteful ones, do hurt others.

I have read many extremely negative reviews, especially on Christian websites, and I find that I do agree with many of the concerns raised. It is a shame that movie makers don't realize that they could make so much more money if they simply made clean movies. It is also true, that once you pick up on an agenda, you do start to see evidence of it everywhere, so there is a danger that much of the anti-Christian elements identified were not so much intentional, as much as a result of non-Christians making the movie. But it was hard to enjoy the entertainment when you are sitting there feeling quite a bit like you are a target. However, millions of children will see the movie nonetheless, so if we can redeem it and tap into their world to teach some truth, its worth the effort. We can't stick to flannel graphs, that's for sure. But in the end, I would show specific CLIPS of the movie, but would not recommend showing this in a church program, as you will very likely get a backlash from rightfully concerned parents.

For parents who will or have seen the movie, here are some discussion questions that would be worth reflecting on with your younger children. (With older children I would point out and discuss the more offensive issues with them, but don't point out things they missed unless you believe they could have been influenced to form some unhealthy beliefs from the film.)