No matter how early you start to plan, how much you delegate, or how many volunteers show up, why does it always seem that you can't get ahead on all that needs to be done? If you've ever asked this, then you're in the right place! 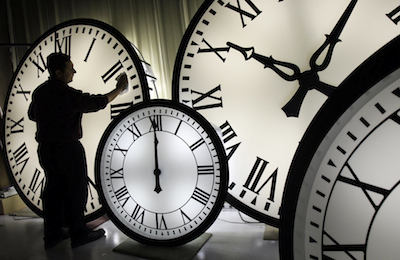 This is one of Barney Kinard’s “Coach’s Conundrums,” or what he calls one of his collection of pithy principles that need some explanation. As he often says to his Protégés (as he calls his students), implementing of his conundrums could alter your paradigm for children’s ministry or influence the way you approach kids.

I want to share this one with you – because when he shared it with me years ago, it hit me so hard between the eyes, it about knocked me over!

Not only is Barney a long time friend, he is one of our Kidology Coaches, who offers weekly coaching calls to his students as part of Kidology’s personal one-to-one personal curriculum-based mentoring program. Every Monday, he faithfully sends out his Coach’s Huddle, an e-mail LOADED with updates, insights, encouragements, pithy wisdom, fun puns, updates on his students, and bonus coaching materials exclusively for his students. It is truly a treasure of knowledge his students are blessed to get (and I’m lucky to be CCed on) every Monday.

I’m taking the liberty to post his Coach’s Conundrum on “Work expands to fill the time allowed” knowing that Barney will not mind!

Here is how he explains it:

This is something that continues to impress me, I find that time pressure is the motivational trigger that compresses the time a project needs for completion. The extremes do occur, too much time and too little time, but for this conundrum to work, we determine the pace to finish on time, mostly. The constant variable is “when does it have to be done?” The answer becomes “the pace of the race” for the finish line. If there is a time to beat, a drop dead goal to complete, the task, somehow, is better done, than if it would be either postponed, set aside or put on the shelf. To put anything “inactive,” is like stopping. However, harnessing the task with time frames is like testing the limits of the stretched rubber band. Our “one-step” method is an overt effort to stop this “all-or-nothing” orientation to work by breaking it down into “doable parts,” matched with a reasonable time table for completion, done, done well, and on time.

Let me share with you – how this “Work expands to the time allowed” principle impacted me. 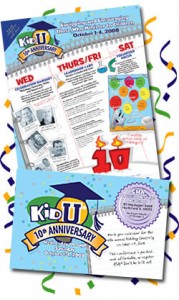 As the founder of the Kidology University conference – Kidology.org put on 15* different Kid U conferences over a period of ten years while I was on staff at the Village Church of Barrington, finally culminating with our 10th anniversary event in 2008. (download that brochure)

Barney was at many of those Kid U’s and at all of the first 3-4 of them, and every year, I was at the church late – and I mean late – up until 2-3a.m. doing last minute details to make the event just right. Each year, trying not to be up so late, I started earlier, and planned better, and delegated better, and yet still I would be there until 2-3a.m. doing last minute things to make the event just perfect for those who would be coming by 8a.m. the following morning. Barney, being a good friend, was always at my side, helping me with those last minute details and ideas.

Finally on the 3rd or 4th year (I forget which), I commented to Barney, “I don’t get it. Every year, I start earlier, I plan better, I delegate better, I have more help, more employees, and yet here I  am, working late the night before. I just don’t seem to be able to go home at a decent hour.”

And that was when he kindly said those magic words, having never complained about being there so late with me, he just said,

“Well, Karl, it would seem to me, that the work expands to fill the time allowed.”

You see, because I was WILLING to work until 2-3a.m. the night before the event – because I loved the event that much, and the volunteers and trainers who would be pouring through the doors in the morning… I wouldn’t leave until 3a.m. I would stay there thinking of things to do to make it better!

The work would expand because I had allowed that much time for my work! I wouldn’t be done until 3a.m. no matter how early I started, how much I planned ahead, or how much I delegated!

The following year, I didn’t not allow that time. I planned a dinner for all my staff and volunteers for the night before the event and determined that after than meal, I had to go home and get a night of sleep. The work could no longer expand into the night. I did that from then on. A few times I did need to run back for a few quick things, but I no longer worked the whee hours… the work no longer expanded, for I was out of time.

And it worked, and I was much healthier for it.

It’s a powerful principle. Coaching works. Sometimes a simple sentence can have a powerful impact on years of ministry into the future.

Ministry doesn’t have to be a conundrum.

POSTS SIMILAR TO THIS ONE:
Setting GOALS for Your Ministry
When Good People Disagree
How a Palm Pilot Can Enhance Your Ministry!