A review of Igor including description of the movie, areas of concern, teachable themes, discussion questions, and scriptures to use. 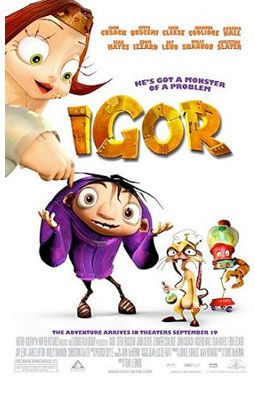 In the land of Malaria, bad is good and good is bad. To get to the top you need to come up with the most evil invention, a creation that will be able to overcome all the other inventions, well, evilly.

Before I go any further, let me explain for the initiated that Igor is not only a character in this movie, but a classification. An igor is apparently a hunchback who, because of his class, is reduced to running errands and pulling levers for his evil, mad scientist master.

The Igor of this movie is not about to fit into this mold. He has plans. He has ideas. He has dreams of building a terrifying monster who will take over the world.

Of course, he has two sidekicks. First there is Brain, who is so bright that he misspells his own name, labeling himself Brian. Scamper is some kind of strange, demented bunny who is not much brighter. When Igor’s mad scientist master blows himself up in an invention gone bad, these assistants join forces to help Igor pursue his dream.

Igor and his cohorts do invent a monster. Yet despite all of his excellent design and hard work, and even the insertion of an evil bone, the monster, Eve, is GOOD! Yikes! Her first dastardly act is giving rides to blind orphans! Igor tries to correct this problem by taking Eve to a brainwashing station who uses video to brainwash, but even this goes wrong when a remote control malfunction causes her to watch James Lipton’s Inside the Actor’s Studio instead of the evil videos that she was supposed to watch. This leaves Eve both good and wanting to be an actress, blissfully singing “Tomorrow” from Annie! The evil Dr. Schadenfreude tries and eventually captures Eve to use her for his own political gain. In the end, Igor, Brain and Scamper risk their very lives to save Eve and the land of Malaria.

Personally, I enjoyed this movie. Igor is really a good vs. evil movie. It is made very clear in this movie that evil is a choice. I am sorry I don’t have this exact quote, but towards the end of the movie, Igor states that everyone is born with an evil bone, but it is our choice whether to listen to it or not.

There are some darns and gosh-es, but otherwise, the language is okay. Carl Cristall wears no pants and likes to scratch his rear end, but it is invisible, so….what can you say? Dr. Schadenfreude’s girlfriend wears many disguises and some don’t cover parts of her up as much as you would like, and there is a bit of innuendo there, but the kids with me did not even pick up on that.