A review of Get Smart, including description of the movie, areas of concern, teachable themes, discussion questions, and scriptures to use. 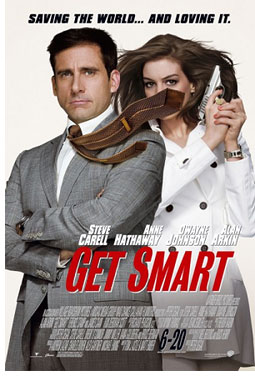 Maxwell Smart (Steve Carell) works as an analyst at the top secret government espionage agency CONTROL. Smart dreams of being a field agent and even passes the field agent test. His skills at detail-oriented surveillance are so valuable, his boss, better known simply as Chief (Alan Arkin), decides that Smart must stay in the office and continue his work. That is, until the sinister organization KAOS infiltrates CONTROL, compromises its field agents and starts killing them off.

The Chief promotes Smart to Agent 86 and partners him with the savvy Agent 99 (Anne Hathaway). Smart is given a little training and some spy-tech gadgets to help him stop KAOS, led by the evil Siegfried (Terence Stamp), from taking over the world. Through Maxwell Smart's gadgets and analytically nerdy know-how, he stumbles upon KAOS' plot. A fellow Agent 23 (Dwayne Johnson) is also involved and Max is the unwitting hero in the end.

If you were a fan of the TV series from the '60s, you will see the very familiar phone booth, hall of closing doors, the updated cone of silence, Smart's original car... even the original Siegfried appears in a cameo. You will also hear the familiar, "Would you believe?" What you don't see is much of the flavor of the original. Instead of portraying Smart in his guileless ineptitude, this Smart is, well, capable. While Agent 99 was infatuated with Max in the series, this 99 doesn't fall for him until the end... but this worked well in the movie. The film is also muddied by trying to be more of an action movie. There were a great deal of laughs, but quite a bit of it was crude humor. The actors are wonderful in the material they were given. Kudos go to the creation of the wonderfully nerdy characters, Bruce and Lloyd, played by Nate Torrence and Masi Oka (Heroes), who have their own DVD coming out next week.

I grew up on Maxwell Smart, and loved the TV show immensely. I am also a fan of the actors in this film. While I wanted to love the movie, I was mildly disappointed with this effort. It was just OK. With the introduction of Hymie (Patrick Warburton) at the end of the movie, it is likely they will have another go at Get Smart. I hope they get it right next time. "Sorry about that, Chief!"

This is not a bad movie. For me, it did not live completely up to what I enjoyed in Get Smart from the TV series. I still loved these characters!

This movie is rated PG-13. While there is not a lot of profanity, there is a good amount of sexual innuendo and coarse humor. Some of the violence is just slapstick with pratfalls, etc... then the movie tries some James Bond-type violence.

Because Get Smart is rated PG-13 and for the reasons stated above, it would probably not be really appropriate to show scenes of this movie in a children's ministry setting. This might encourage children to watch the whole film. It would be a mistake to endorse it in any way for that reason.