Movie Review: The Water Horse: Legend of the Deep

A review of The Water Horse: Legend of the Deep including description of the movie, areas of concern, teachable themes, discussion questions, and scriptures to use. 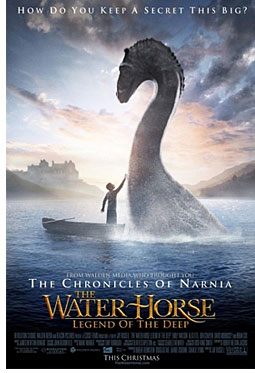 The Water Horse: Legend of the Deep wasn't quite what I was expecting it to be. The previews set this one up like it's going to be a child-friendly romp with a dino-pet theme that the little ones will just eat up. I don't know if the family in front of me (who just so happened to have a child that was begging to leave) influenced me much or not, but this movie was simply not made with the idea of keeping little ones engaged. You'll find some classic kiddy moments (such as the dog running across the table during a fine meal), but they are lost through the movie and replaced by serious discussions about the loss of Angus' father, Lewis' past, Anne's stress and World War II.

Water Horse begins with an old man telling two Lock Ness tourists a story. Angus (Alex Etel) is walking along a beach and finds an odd rock. Much to his surprise, his large rock... hatches. Angus, who is not allowed to have a pet, hides Crusoe (the Water Horse) from his mother. His sister Kirstie (Priyanka Xi) and the new house handyman Lewis (Ben Chaplin) help him until Crusoe becomes far too large to be a garage pet. You'll never guess where they decide to release him! ;)


The problem that I had with this film is that it was just a story. I don't mean that it was fiction, I mean that it really had no "conflict and resolution." It was just a story of the events that happened to Angus and Crusoe. That's where this movie's problems lie: it's not made for kids, it doesn't contain the plot needed for adults, it's not funny enough to be a comedy, it's not deep enough to be a drama. It's just a good story about the legend of the Lock Ness monster. I don't want to make it sound like I hated the movie, because I didn't. There are movies where after you leave you'll tell everyone to go see it; others you'll tell people not to see. I'll probably just not say much about this one.