A review of Bee Movie including a description of the movie, areas of concern, teachable themes, discussion questions, and scriptures to use. 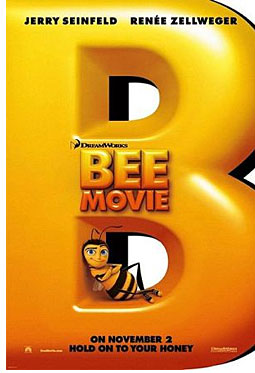 Imagine if the society that bees operate in was a mirror of our own, just with everything "beeish". Bee Movie begins with Barry Benson (voiced by Jerry Seinfeld) getting ready for his Bee College graduation. Berry then discovers that the job he chooses at Honex will be his job forever. Dissatisfied with the prospect of being stuck in the same job for the rest of his life Barry ventures outside of the Hive where he explores the outside world.

Barry's out flying, something by aeronautical standards he's not supposed to be able to do, when a rainstorm begins. In his search for shelter Barry flies, or more accurately crashes, into the apartment of Vanessa (voiced by Renee Zellweger), a florist, and finds himself in the guacamole dip where he's scooped up and is about to be eaten. Vanessa ends up saving Barry from certain doom and releases him back outside the window he came through.

As a bee, Barry has one major law that he's not supposed to break: never talk to humans. Barry's overwhelmed with a sense of gratitude towards Vanessa for saving him that he breaks the cardinal rule and talks with Vanessa, which becomes the beginning of their friendship. The friendship blooms into a kind of infatuation between Vanessa and Barry, which leads into some relational conflicts between Barry and Vanessa's current human boyfriend, Ken.

In his adventures outside of the hive, Barry discovers that the human world has tapped into the bee's greatest resource, honey. Seeing it sold in stores and then discovering a honey farm where bees are routinely "smoked" to harvest their honey production. Appalled at the working conditions at the farm, Barry sets out to sue the human race to give bees equal rights, to halt the production of honey, and to eliminate all negative or harmful bee references or likenesses. Winning the case, the bees take sole position of all the honey in the world and strip the musical artist Sting of his stage name. With more honey than they can ever produce, the bees stop working. They stop producing honey, they stop collecting nectar, which means they are no longer helping to pollinate the flowers, trees, and shrubs resulting in a worldwide shortage of foliage.

The sudden absence of flowers begins to take its toll on the relationship between Vanessa and Barry. Vanessa is forced to close up her flower shop and tries to leave Barry behind as she goes to visit the final Pasadena Tournament of Roses. Faced with the extinction of all plant life on earth, Vanessa and Barry seek to bring back a float full of flowers so the bees can begin to re-pollinate the earth.

Like many modern animated films, the plot and dialogue are targeted to both children and adults. While there is some adult themed dialogue and imagery that might be perceived as mildly offensive, the humor is vintage Seinfeld and is considerably less obnoxious and "in your face" than the Shrek films.

The relationship between Barry (a bee) and Vanessa (a human) is somewhat odd. It might be harder to explain to a child. Although the attraction between the two is based on their character and personality rather than a physical attraction.

Overall, Bee Movie is one of the more "safe" films that have been released and marketed to families in the past several years.