A review of Fantastic Four: Rise of the Silver Surfer including a description of the movie, areas of concern, teachable themes, discussion questions, and scriptures to use. 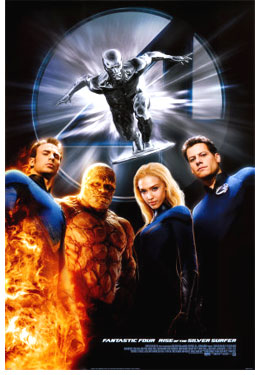 Fantastic Four: Rise of the Silver Surfer picks up some time after the original 2005 film as Reed Richards (Mr. Incredible) and Sue Storm (The Invisible Woman) are in the final days before their wedding. Johnny Storm (The Human Torch) maintains his mission to turn the Fantastic Four into a moneymaking and fame-generating proposition. Ben Grimm (The Thing) seems to have come to grips with his new body and basks in the love and acceptance he receives from his blind girlfriend, Alicia Masters.

With Victor Von Doom seemingly vanquished in the first film, a new, more-ominous and dangerous evil emerges as the massive planet eating monstrosity, Galactus, and his herald, the Silver Surfer. Galactus first appears on the screen as it drains a planet dry of its organic and molten energies. The result is a lifeless planet that has only temporarily satisfied the appetites of the planet devouring Galactus. With the planet drained of its life force it's up to the herald to find a new planet for his master to drain.

Johnny Storm takes Reed and Ben out on the town for a final night of revelry at a trendy dance club. Mr. Incredible is able to show off some flexible dance moves before being interrupted by Sue Storm and General Hager who's come to ask Reed Richards for his help in explaining some strange atmospheric and climatic disturbances. Reed turns down the opportunity to build a special sensor array and says that he has a wedding to prepare for, gaining admiration from his fiancée. However, he secretly creates the sensor, which ends up attracting the Silver Surfer, who arrives just in time to interrupt the wedding ceremony.

In his first encounter with the Surfer, the Human Torch is contaminated, resulting in a strange transfer of powers whenever he comes in contact with another member of the Fantastic Four.

The Surfer's arrival awakens Von Doom, resulting in him being freed from his prison where he's laid dormant since the last film. Doom eventually manages to manipulate his way into the graces of General Hager, who teams him with the Fantastic Four, to find a way to capture the Silver Surfer. Tension mounts when they realize the Surfer is there to destroy the Earth.

During the third encounter with the Surfer, the Fantastic team witnesses a peculiar action of the Surfer who protects The Invisible Woman and demonstrates a level of "humanity" that they didn't expect. Their plan to capture the Surfer succeeds and the Silver Surfer's incredible power is neutralized. While being held as a prisoner Sue Storm learns from the Surfer that Galactus will arrive at Earth in a matter of hours. Meanwhile, Doom has taken control of the Surfer's power and has unleashed this awesome force on the Fantastic Four. In order to defeat Doom the Four must work together as a team like they have never done before. By combining all their powers into one person, Doom is defeated.

Regaining his power, the Silver Surfer sets out to destroy Galactus and save the Earth just in time.

The movie concludes with the marriage of Reed Richards and Sue Storm, just as another life-and-death crisis arrives.

The level of violence is consistent with the first movie and most recent comic book films. There are several sexual innuendos and references to sex. The comments are not derogatory, but are clearly present. The trendy nightclub scene does have several women in "party clothes" and dancing mildly provocative.