A review of Shrek the Third including a description of the movie, areas of concern, teachable themes, discussion questions, and scriptures to use. 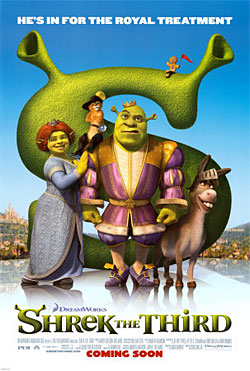 Shrek, Donkey, and Puss in Boots go on another quest together to find the next king of Far Far Away, while Fiona and the other fairy tale princesses stay behind and defend the castle from Prince Charming and his army of fairy tale villains.

Shrek the Third opens with Shrek and Fiona in the Far Far Away castle where they have been since Shrek 2. We quickly discover that Fiona's father, the frog, is dying. After the king's death, Shrek, Donkey, and Puss, sail off to find the next king of Far Far Away, Arthur (a.k.a. Artie). As the ship begins to sail Fiona tells Shrek that she's pregnant and that he's going to be a father. The boat arrives at an island where they discover Artie, the runt-like, often-picked-on, character in the local high school. They manage to convince Artie that he's the new king.

Meanwhile back in Far Far Away, Prince Charming has gathered an army of fairytale villains to lay siege to the kingdom so they can have their own "happily ever after." Fiona, the queen, and the other fairytale princesses (Sleeping Beauty, Snow White, Rapunzel, and Cinderella) try to escape from the horde of villains only to be betrayed and captured by Charming, who has secretly been in league with Rapunzel.

Shrek, Donkey, Puss, and Artie find Mr. Merlin to help them get back to Far Far Away. The character of Mr. Merlin is a retired, over-stressed, high school magic teacher who uses mysticism to get to some of the "father issues" in both Artie and Shrek. Mr. Merlin uses magic to transport the four characters to Far Far Away, and in the process Donkey and Puss switch bodies.

The princess cast off their dependence on being rescued from men and instead free themselves from the prison in which they are being held. The movie comes to a climax when Shrek has been captured by Charming and is planning to kill him as a part of a musical play he has planned. Ultimately, Charming is foiled and Artie reaches the goodness that is in the villains to show them that there's another way for them to be happy other than being evil.

The third installment of the Shrek movies maintains the same humor as the previous two. More bathroom humor and mild language, the use of "stupid" and "butt," along with certain attitudes of selfishness and bitterness in traditionally well-loved characters. The princesses are portrayed as self absorbed, bickering gossips rather than the sweet characters you find in their original stories. If the humor, language, and character attitudes offended you in the first two films then Shrek the Third will do the same.

There is an additional element of mysticism with Mr. Merlin. Mr. Merlin is more of a goofy, sixties hippy-like character and doesn't really play a strong role in the movie. Even though there is use of magic, it's nowhere near the level of Shrek 2.

While there are several themes that could be pulled out of this movie, here are the three most predominate and well-established themes: