A review of Spider-Man 3 including a description of the movie, areas of concern, teachable themes, discussion questions, and scriptures to use. 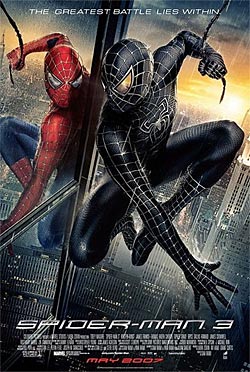 The movie begins (and continues) rather slowly with lots of stuff about the relationship difficulties between Peter Parker and Mary Jane. As they stare lovingly at the stars on a giant web, Venom drops to earth on an entirely unnoticed meteor and hitches a ride on a Peter's motorcycle. It's patient, though, and doesn't do anything again until about halfway through the movie. Meanwhile, an escaped convict is running away from the police and slips into a scientific testing plant (with really bad security I might add) and stumbles into one of the test sites, thereby becoming the Sandman, a really powerful bad guy made of sand. Harry/Goblin gets into a huge fight with Spider-Man (One of three major fight scenes in the movie) and is subsequently knocked unconscious causing him to have amnesia for a while before remembering that he's really a demented bad guy.

At some point, after more relational difficulties, Venom takes over in the form a new black suit which causes Peter to turn very aggressive until he finally hits Mary Jane and realizes the error of his ways. He tears off the black suit which gets really angry with him and bonds with a competing photographer -- who eventually finds the Sandman and together they agree to fight Spider-Man. After having fought the Goblin over more love-triangle issues, Spidey returns to ask for his help in rescuing Mary Jane from Venom and Sandman. One more really big fight scene kills the Goblin and Venom, and Sandman leaves after he and Spider-Man talk about the moral of the story.

If it weren't Spider-Man, I don't think most kids would watch this movie long enough to get to the good parts. (By good parts I mean the violent, villain-involved, parts consisting mostly of the last 15 minutes of the movie. I didn't think the love triangle stuff was particularly well-written.) However, it is Spider-Man and every little boy I know will want to see it.

No sex and very little bad language (I think I heard one instance of profanity) rank this movie better than most. Violence is to be expected from a superhero movie, though there is nothing in the violence category that is particularly gruesome. My only real concern here is the attitude toward asking Jesus for forgiveness that most children won't pick up on.

While Peter is busy being controlled by the black suit, he gets into an argument with a competing photographer who has forged a photo to get a job they both wanted. The other photographer begs Peter not to turn him in, to which Peter replies, "you want forgiveness, get religion." Later that photographer walks into a church, stares up at a crucifix and prays for God to kill Peter Parker. Immediately afterwards, the black suit attaches itself to him and he becomes Venom. At the end of the movie when Peter is alive and Venom is dead, Spider-Man and Sandman talk about forgiveness and the implication is that forgiveness comes from yourself and from other people, but not from Jesus. However, that theme is probably too subtle for most kids to pick up on and there are some good aspects of forgiveness that can be talked about from this movie.