A review of Meet the Robinsons including a description of the movie, areas of concern, teachable themes, discussion questions, and scriptures to use. 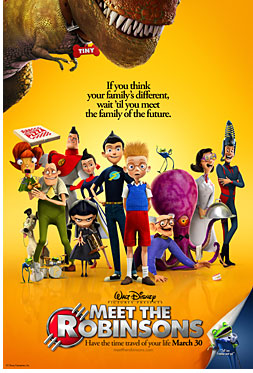 "Around here, however, we don't look backwards for very long. We keep moving forward, opening up new doors and doing new things... and curiosity keeps leading us down new paths."

Keep Moving Forward. This is the primary theme found in Disney's latest animated film, Meet the Robinsons. It permeates not only the film itself, but also the background behind the film.

In order to fully understand how the phrase "keep moving forward" is intertwined with this film, a little animation history is in order. (This has nothing to do with children's ministry, but you might as well learn some other things during your time on Kidology, right? For those who would like to skip down to the plot overview, click here.)

In the context of the business side of Meet the Robinsons, "keep moving forward" symbolizes the desire by Disney to return to the glory days of animation marked by such films as The Little Mermaid, Beauty and the Beast, and The Lion King. Because after all, let's be serious... when was the last time you saw a good Disney animated film at the movie theater that didn't have the Pixar name on it?

Meet the Robinsons is a film that was birthed by an initiative that is no longer in place at Disney. Years ago, Disney only financed and distributed Pixar films such as Toy Story, Finding Nemo, and The Incredibles. (Disney didn't actually own Pixar at the time, as many have assumed). The Mouse House saw how successful these films did, along with computer animated films from other studios, and decided internally that computer animation was their future as well. So they closed down their traditional animation departments, fired most of the animators, and focused solely on developing computer animation. Their first release from this initiative was 2005's Chicken Little. The overall intent was to produce successful computer animated films, thus giving them leverage with Pixar so that they could work out a better distribution deal (Pixar, at the same time, was intent on no longer working with Disney after the release of Cars).

Then, just like that, management and many other things changed at The Walt Disney Company... including their complete acquisition of Pixar. More importantly, they were able to obtain the talent that had been producing so many quality films over time, headed by Pixar's chief animation guy, John Lasseter. With the buyout, Lasseter assumed the role of leading the animation departments for both Pixar as well as Walt Disney Feature Animation... which left somewhat of a challenge, given that both Disney and Pixar were producing movies using the same technologies (computer animation) aimed at the same audiences (families and kids). Couple this with the fact that Disney actually wasn't doing so well in their transition to computer animation... hurting in talent, story development, and overall recognition. In short, Disney's reputation in animation was pretty nonexistent in the late 1990s/early 2000s, replaced by higher profile releases from DreamWorks Animation (Shrek), Sony (Happy Feet), and Fox (Ice Age).

By the time the Pixar folks became full-fledged Disney employees, Meet the Robinsons was well on its way to completion as the 46th animated feature produced by Walt Disney Feature Animation. (Even though Disney now owns Pixar, the two animation studios will continue to function separately... more like two divisions of the same company). And at that point, taking a look at how the film was shaping up, Lasseter and his Pixar staffers ordered half of the film to be scrapped and redone. It was a shot across the bow of Disney Feature Animation that the status quo would no longer be tolerated... it was time to "keep moving forward" to something new.

The resulting film isn't on the same level as those previously mentioned classics (probably due to so many changes along the way), but it's probably the strongest animated film to come out of Disney since Lilo and Stitch. Overall, a huge step in the right direction... and an indication of good things to come from Walt Disney Feature Animation. (See, aren't you glad you read all that? Now, back to the review...)

The idea to "keep moving forward" plays out in the story of Meet the Robinsons as well. Of course, you probably would never have caught that from the unimpressive trailers promoting the film. I'm not sure what I expected the story to be... it seemed so confusing. However, after viewing, I was pleasantly surprised as it was not at all what I expected from the marketing campaign.

The crux of the action revolves around an orphan named Lewis, who is a creative, inventive boy who longs to be part of a family, but alas is still not adopted at the age of 13. He develops a keen desire to find his birth mom, but unfortunately no one knows who or where she is. So Lewis invents a clever little machine to help him retrieve the memory of his mother before he was placed on the orphanage steps.

With the help of his roommate (Goob) and his science teacher, he works to perfect a device called the "Memory Scanner". As he is about to demonstrate his invention at a science fair, he's approached by a fellow named Wilbur Robinson, who is actually from the future! He warns Lewis to watch out for a villain descriptively named Bowler Hat Guy.

The bad guys sabotage Lewis' "Memory Scanner", it doesn't work, he gets dejected, and Bowler Hat Guy ends up stealing it -- much to the disappointment of our time traveling Wilbur Robinson. Wilbur convinces Lewis to travel with him to the future to solve this apparent problem.

It's at this point that we see the story borrowing elements from the Back to the Future trilogy. In the future, Lewis meets Wilbur's family, quickly learning that the Robinson clan is crazy, goofy, funny, and most of all, accepting and loving of Lewis. Thus creates the classic dilemma of Lewis not wanting to return to his own time. I won't spoil the film for you entirely, but let's just say he's strongly encouraged to return to his own time for many reasons. Again, think about the space-time continuum and all that good stuff.

It has a happy ending... after all, it's a Disney movie!

This movie is based on a 1990 children's book called A Day with Wilbur Robinson, written by William Joyce. It is rated G and has a Pixar-like approach to content by providing entertaining action and dialogue for kids and adults alike. The color palette is extremely vibrant, paralleling the rapid-fire action. It's probably a great film for the attention deficit crowd! The film is pretty much a visual roller coaster.

Contentwise, Meet the Robinsons was strongly ethical. There was no apparent use of foul language or suggestive scenes. It was very clean overall.

Of note is the visual depiction of the villain, Bowler Hat Guy. He is made to look menacing and seems to be modeled after Professor Fate from the live action film, The Great Race (1965). This character might scare some young kids... at least until they find out that he's pretty much a clueless goof!

I saw this film with my wife who is a therapist that works with both foster kids and those who have been adopted. Thus the orphan plotline was of interest, especially as many kids who are in these situations sometimes see films of this nature and react differently than traditional audiences. (Lilo and Stitch is a perfect example. While it is a fun film overall, it might upset kids who have been separated from their birth families and are in the foster care system. They do not have family who will stick by them through thick and thin as this film portrays.)

If you have kids in your children's ministry who are either adopted or in foster care, this film might hit home with them on a more personal level. (Incidentally, the film's director, Steve Anderson, is adopted himself). It's the desire of most kids in these situations to want to know their birth family. In Meet the Robinsons, Lewis fantasizes about meeting his birth mother and pursues a plan to find her. What's interesting is that while the film approaches these subjects rather bluntly, in the end the lead character decides on his own to instead "keep moving forward" with his given situation rather than focusing on the past. Overall, this topic is handled well and probably will be well received by foster/adopted kids.

A final note about Digital 3D

Along with being shown in traditional theaters, Meet the Robinsons is being presented on over 600 digital 3D-equipped screens. In these situations, you are provided a pair of glasses with polarized lenses (no red/blue cellophane here!) While 3D technology has come and gone over the years, the type of 3D being used on Meet the Robinsons is, in my opinion, only going to increase in use. This is due to the ease of implementation in theaters that show films using digital equipment (which most are moving to these days). Disney, DreamWorks Animation, and other studios have stated that they will be releasing future films in this format, along with converting older films to be shown this way. This may be a trend to watch as kids in your children's ministry are exposed to more and more 3D films in theaters.