A review of Brave, including description of the movie, areas of concern, teachable themes, discussion questions, and scriptures to use. 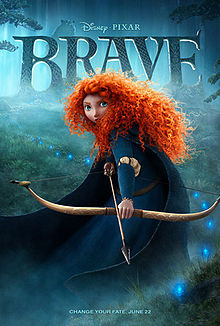 Hurray! Another Disney Princess is born! Enter Merida, the princess in Brave, but she is not singing syrupy songs about her collections…she doesn’t sing at all! Gasp! Fact is, Merida would probably rather not be a princess, and that is where the trouble starts. Merida’s mother, Elinor, is trying to raise her daughter to be a proper princess. From music lessons to proper eating, speaking and manners, Elinor’s attempts to create a perfect princess are met by growing contempt from a daughter who would rather ride horseback and practice archery.

When Elinor perceives that Merida is of age to be betrothed, well that is the straw that breaks the camel’s back. Suitors are brought it and in a real rebellious twist, Merida competes against them for her own hand and wins. She calls her mother a beast and cuts through a tapestry depicting her family, separating herself from everyone else. Escaping to the woods she comes upon a mysterious wood-carving woman, a witch, and buys a spell. She tells the witch, "Change my mom. That will change my fate."

Because I could never explain this any clearer, I will quote the pluggedinonline.com review, “Merida and Elinor's difficult, complex relationship lies at the very soul of Brave. But while Merida may think her mother's a beast, and Elinor might consider Merida a brat, there are no villains here: only two strong, caring and (might as well say it) brave women who, in spite of their differences, love each other very much.”

Mother and daughter eventually end up risking their lives for each other. They both change in the process. The daughter develops a deep understanding and respect for her mother. The mother develops a new found admiration for her daughter’s independent spirit.

Yes, there is witchcraft in this movie. The daft witch stirs a cauldron and is assisted by a crow. It is very clear that Merida’s involvement with the witch was a very bad decision with very bad results. In fact, a lot of the movie centers on overcoming the evil that came from that decision.

The magic in this movie is not the normal Disney kind of magic…more apropos of pre-Christian Scotland where the influence of the druids was still very strong. It more Harry Potter-ish in nature. There are sprites called will of the wisps that give direction at times.

There is violence in the movie. There are bears that fight viciously. Men fight with swords and arrows and fists. You just never really see anyone get hurt.

You get to see some rear ends, too. The men have to use their kilts to scale down a wall and you briefly see their back sides. Merida’s brothers are naked at the end and you see their back sides briefly. A servant woman shows quite a bit of cleavage.

Merida’s brothers get away with all kinds of shenanigans that deserve punishment. No one says anything to them.

Personally, I liked this movie a lot. It was so different, with a tale I had never heard. The message was poignant and ran deep throughout the movie. So often the change we are looking for is not in other people, but rather on the inside of us… reflecting on our sinfulness, our pride.  Repenting is the beginning of real change.