A review of Hotel Transylvania, including description of the movie, areas of concern, teachable themes, discussion questions, and scriptures to use. 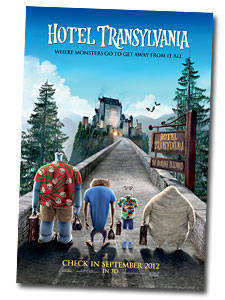 Dracula has a problem. His daughter, Mavis, is turning 118 and wants to spread her wings and fly away…which incidentally she can do because she’s a vampire and can quickly transform into a bat. Papa Dracula wants her to stay home where she is a protected in a top secret hotel, the Hotel Transylvania that he built only for monsters and the like. No humans allowed because everyone knows that humans are dangerous to monsters. It was humans who burned down Dracula’s home and killed his wife. Monsters are merely understood. Humans- now those are the ones to be feared. It is the eve of Mavis’ birthday and every monster that is any monster is checking in to join in the celebration. Also checking in? Jonathan, a world traveling backpacker named Johnny, and when he checks in mayhem begins.

Like Monsters, Inc. this movie is full of zany monster characters, some good and some bad. Unlike Monsters, Inc. we know these monsters….Dracula, Frankenstein, Bride of Frankenstein, the Mummy, the Invisible Man, Werewolf and more, each with their individual idiosyncrasies, but more humorous. There are ghosts, ghouls and goblins. Even though these monsters do have special abilities, none of them are remotely explained or presented as spiritual.

When Dracula gets mad, he gets scary, really scary. His eyes turn red. His face gets demonic. His fangs come out. He does explain that he would never kill anyone because that would, “Set monsters back hundreds of years." Dracula, however, no longer drinks blood because, “It’s so fatty, and you never know where it’s been.” This was not a movie I would take young children to, yet when I went to the movie there were several young children there who were really scared.

In order to protect his daughter, Dracula lies about who Johnny is, among other things, and he constructs a major deception to try to keep his daughter at home. Dracula does show remorse for these acts. While his heart might be in the right place, his actions not so much. As Dracula says, "As a father you do everything you can to keep your family safe, even if that means you have to break their trust."

There are some fight scenes, but the slapstick violence is not unlike what a child would see in any secular cartoon. There is a fair share of bathroom-type humor with monsters passing gas, etc. There is also a bit of sexual innuendo.

There is no profanity or misusing God’s name.

Hotel Transylvania is a film about a father/daughter relationship and a budding romance between a human and a vampire. While the actors do an incredible job voicing this movie, the story is just kind of ho-hum. It has some life lessons packaged between monsters passing gas and peeing on the furniture. This wasn’t a bad film, but it also one that I would never use in children’s ministry. It is a bit too scary…and the bathroom humor will be repeated and repeated and repeated