A review of Nim's Island including description of the movie, areas of concern, teachable themes, discussion questions, and scriptures to use. 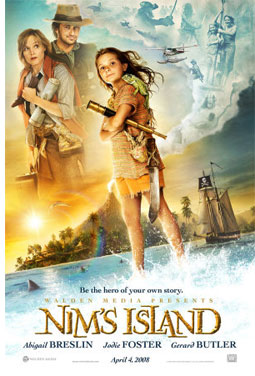 Nim's Island is a remote and deserted jungle island somewhere in the Pacific Ocean. It is home only to 11-year-old Nim and her father. With an imagination of epic proportions, Nim fills her days with exploits of daring, rivaling those of Alex Rover, the fictional protagonist of the Rover Books, her favorite literary diversion. When Nim's father goes missing on a scientific oceanic excursion, Nim turns to Alexandra, the author of the Rover Books, for help. As the story unfolds, it turns out that Alexandra needs Nim just as much as Nim needs her. The question is: will both can find courage and overcome their respective daunting challenges?

This film is an excursion into blurred storytelling, mixing fantasy, adventure, comedy and drama, with a hint of romance at the end; sort of a mishmash hybrid between Home Alone, elements of Flightplan (mostly because of Jody Foster's attempt to play a character conflicted by psychological duress), and Gilligan's Island. However, it is much more forgettable due to its pervasive one-dimensional characters.

Nim's Island seems to be directed toward younger audiences as it sports an adolescent tone. However it is laced by distinctly mature themes, thereby earning its PG rating. It begins with the distinctive "once upon-a-time" narrative marker, indicating that it is unapologetically a fairytale, at least to some degree, yet not entirely. We are never really quite sure, hence its confusing feel. It concludes with a "happily-ever-after scene" as well. Yet we are hard pressed to care, since we never were given a chance to know the characters as a deeper level.

Nim's Island blends mediocre to downright absurd storytelling with occasional flashes of acting brilliance and comedy relief. Unfortunately, the best acting comes from an unlikely source, the menagerie of animals which have befriended the girl, not least the lizard and the sea lion. They also are the most responsible characters. The adults and children mostly are portrayed variously as self-absorbed, emotionally and mentally unstable, in some cases as cartoonish buffoons, and markedly one-dimensional, as if their presence is ancillary to the point of the story. This is an unfortunate state of affairs since it relegates its one well known veteran actor, Jody Foster, to the shackles of a caricature, rather than unleashing her to portray her character in depth, as she is fully capable. Various other actors in the movie are also quite capable, but they are not allowed to realize their potential. One wonders if this was intentional.On the positive side, father and daughter do have a warm relationship, especially in light of the mother's death at sea previous to our current narrative.

Thus, Nim's Island is unfortunately a study in genuine potential frustratingly unrealized. In the end, the story simply gets lost in the muddied plot points, none of which come to satisfactory fruition. On a scale of A to F, I give the movie a C-, because the animals really do provide worthwhile entertainment. Yet, the story is so deliberately lost in the muddle of its telling, that I gave up feeling any suspense at the impending outcome, except that the credits should roll as soon as possible.

The movie takes for granted that it is OK to leave 11-year-olds at home alone while dad embarks on a scientific excursion, which eventually would imperil his life, were it not for the intervention of the nearly sentient goose. Further, it assumes that it is OK for an 11-year-old girl to contact via the Internet what she thought was an adult male author of her favorite series of fiction adventure books, later even pleading with him via e-mail to come rescue her when she realizes her tardy father might be in trouble and that she, in fact, is hurt from a fall.

Further complicating this concern is the fact that the writer is actually a female adult who experiences an ongoing state of mental delusions in the form of an imaginary alter-ego and fear of the outdoors and other people. While she is said to have severe fibromyalgia, the portrayal goes far beyond that. Although I doubt this was the intent, it seemed to highlight the risks of children contacting strangers on the Internet. Yet, when the stranger, Nim, and her dad meet, they quickly fall in love and become a family. This points out the unrealistic idealism of the movie which takes for granted easy solutions to complex issues, namely that the author should suddenly overcome her difficulty with being around other people to the extent that she can hold hands with a strange man on a deserted island as his daughter and assorted animals cavort on the beach.

There are scenes of psychological duress portrayed by Jody Foster which might be disturbing for younger children. Also, there are scenes of peril on the island when Nim inadvertently sets off a volcanic eruption and landslide which place a large number of tourists, not to mention herself, in jeopardy. Most people will find this almost comedic because the impression is conveyed as an emotional subtext, both here and in other parts of the movie, that there never is any real danger. After all, it is a "once upon a time" fairytale. But again, young children might be frightened.