A review of The Simpsons Movie including a description of the movie, areas of concern, teachable themes, discussion questions, and scriptures to use. 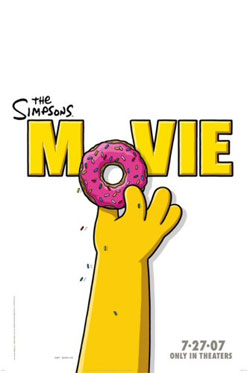 After more than 20 years of TV episodes, The Simpsons creator Matt Groening finally decided the time was right to put Homer, Marge, Bart, Lisa, Maggie and the rest of the town of Springfield onto the big screen via The Simpsons Movie. The result? A movie that parents will probably take kids to and be quite shocked at just how far the writers were willing to push the envelope.

The town of Springfield has been carelessly using Lake Springfield as a dumping ground for years. As a result, Lisa Simpson, the town's environmental conscience, begins a campaign to preserve the lake. Unfortunately for Lisa, her father is Homer Simpson, a bumbling lazy father who always seems to do the wrong thing. While Homer is attempting to properly dispose of his pig waste silo (yes, he rescued a pig), he receives a phone call from one of his co-workers informing him of free donuts. Homer, feeling a sense of urgency, decides to dump the silo in the lake. This results in the lake becoming a toxic cesspool that creates mutant squirrels.

Enter EEEEPAAAAA (the EPA) and their slightly power-mad leader who's bent on destroying the most pollution-ridden town in America (you guessed it, Springfield). As Springfield stands on the brink of destruction inside a giant glass dome, the Simpsons -- and in particular, Homer -- take a journey of self realization (albeit, on the shallow side) and eventually come to grips with the importance of relationships.

A running gag in the television show is Bart's continual streaking. Through his fault or external influence, Bart's bare bottom can be seen semi-often in the show. The movie takes this a step further and actually shows the front view of Bart... all of it.

Shots are taken towards Christianity and the Bible throughout the movie. When the Simpsons arrive at church, Homer is overheard making fun of the people inside. When Grandpa Simpson begins to have a vision from God, Marge asks Homer to "do something." Homer opens a Bible, rifles through the pages and exclaims "this book doesn't have any answers!" The family, sans Marge, immediately writes off this episode of bizarre behavior in favor of ice cream.

As the Simpsons are on the run from the EPA, they hole up in a motel. When a police car arrives outside as Marge is at the vending machine, she gasps in fright. However, these two officers aren't interested in Marge. Rather, they are interested in each other. The two male officers are seen kissing as they enter into a room.

The TV show has a history of pushing the barrier of offensive language. This movie contains a higher dose including the use of "g** d****". Adults and children alike are heard using this language.

Physical violence (in the guise of slapstick humor) is seen throughout. Homer chokes Bart, gets a hammer stuck in his eye, gets shocked while eating an electrocuted fish, is shot with an arrow... you get the idea. Some of it's funny. Some, not so much.