A review of Transformers including a description of the movie, areas of concern, teachable themes, discussion questions, and scriptures to use. 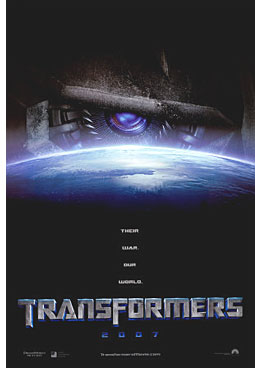 Transformers takes numerous opportunities to develop the story, plot, and characters. However, for the movie overview I'm going to stick with the main characters... Sam Witwicky, Mikaela, and the giant robots.

The movie opens with a monologue of Optimus Prime telling the story of the creation of the Transformers. He tells of the cube that is the source of all life on Cybertron. A battle between the Autobots and Decepticons ensues and the Cube leaves Cybertron and comes to rest on Earth.

The first major action scene follows with the first sign and attack of the Decepticons. A Black Hawk helicopter lands, transforms, and attacks an army base in Qatar, seeking to gain access to the defense department mainframe -- which is quickly disabled. This leaves the Decepticon to battle the human soldiers, after which it's believed no soldiers escape alive.

The movie transitions to Sam Witwicky, a high school student, who moves to the front of the class to give an oral report on his great uncle, a famous arctic explorer. After school, he travels with his dad to purchase his first car, a yellow Camero, which ends ups being the Autobot Bumblebee. With his new car, Sam begins his adolescent search for a girlfriend. Sam has his sights set on the football star's girl, Mikaela, who rejects the notion of being the football stars "little bunny". Mikaela ends up being a "gearhead" and a strong female character that ends up being more than just a "gorgeous girl".

The U.S. Government begins the investigation into who attacked the base and how they were able to disable the computer security protocols. During the investigations, another attempt to access the defense systems mainframe is underway by a Decepticon that is disguised as a small boom box. This attempt is partially successful and the Decepticon is able to escape with a single name, Sam Witwicky's great uncle. The search is on for the Decepticons to find Sam and his uncle's antique glasses Sam is selling on eBay.

Meanwhile Sam awakens to what he believes is a someone stealing his car. He follows the car and discovers that it's really some giant robot. In his attempt to escape from the yellow Camero he comes face to face with a police car that quickly turns into a Decepticon, Barricade. Sam flees the evil giant robot, running into Mikaela, with Bumblebee rescuing the two of them. Bumblebee and Barricade come to blows with the Autobot triumphant and reunited with Sam and Mikaela.

Soon the entire Autobot team reunites to protect Sam and Mikaela and retrieve the spectacles that hold the coordinates for the location of the Cube. They all return to Sam's house where they hope to find the glasses only to have Section 7, a secret government agency, come and arrest Sam and his family. The Autobots attempt to rescue Sam but when Section 7 calls in reinforcements, the Autobots are forced to retreat leaving Sam, Bumblebee, and Mikaela to be recaptured. They are taken to Section 7's headquarters, the Hoover Dam, where they discover that the Cube is located along with a frozen Megatron, the leader of the Decepticons.

The Decepticons discover the location of the cube and free Megatron leading up to the climactic battle for control of the Cube.

The final battle takes place in a desert city with the Decepticons versus the Autobots and humans. The Decepticons battle fiercely for the Cube, immobilizing Bumblebee, while Megatron ends up tearing one Autobot in half. Both sides suffer heavy casualties. Megatron appears to have defeated Optimus Prime and has Sam at the tip of his fingers. Sam thrusts the Cube into the chest of Megatron, killing him and ending up as the hero of the battle.

With the Cube destroyed, the Autobots remain on Earth, hiding in plain sight as the movie ends with a monologue from Optimus Prime.

Transformers is rated PG-13 and rightly so. There are numerous battle scenes, although very little blood, many with dying people or robots. There are several profanities, a few sexual innuendos, and one sensual scene where Sam ogles Mikaela, who's wearing very skimpy clothing. There's another scene at the car lot where the car salesman disrespects his "Mammy" who also used an obscene gesture.